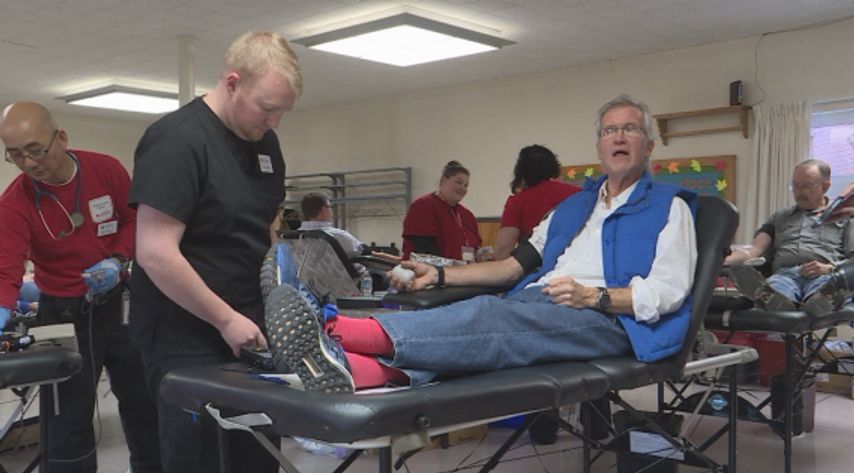 CENTRALIA - Where would a man celebrating a half century of giving blood go to celebrate?

Another blood drive of course.

Ashland resident Patrick Lee walked into his first blood drive on November 15, 1968 as a 17-year-old freshman at MU.

Remembering his wait in line at the student union, he says to this day he's still not sure what made him show up.

"Undoubtedly, I saw a flyer on campus that mentioned a blood drive," he said. "I knew nothing about it. I thought, 'I can do that', and so I did it."

Whatever the reason, Lee is still going strong 50 years and 197 donation sessions later.

Lee said his 50 years of giving have all added up.

Craig Jackson works as a donor recruiter for the Red Cross. He said donors like Lee are a dream come true.

"We love them, for lack of a better way to put it," he said. "They're our bread and butter, so to speak."

Jackson said donors like Lee are few and far between, making contributions like his that much more important.

"The challenge is always to get new donors into the system," he said. "When we have our repeat donors that are coming back and coming back as often as possible, it really helps us keep a stable blood supply throughout the year."

Lee said he donates because everyone needs blood.

"One of the media people emailed me back and he said 'I've had blood transfusions twice in my life. People like me are alive because of people like you,"' he said.

Missouri River Regional Library brings back a traveling library for the community
JEFFERSON CITY - The Missouri River Regional Library's 'Bookmobile' is back on the road delivering books after not running for... More >>
12 hours ago Tuesday, July 14 2020 Jul 14, 2020 Tuesday, July 14, 2020 5:51:00 AM CDT July 14, 2020 in Top Stories
Share:
Email
Facebook
Twitter

Columbia businesses don't have to refuse service to unmasked customers
COLUMBIA—About 20 people filed complaints about other individuals or businesses not following the mask ordinance this weekend, according to the... More >>
23 hours ago Monday, July 13 2020 Jul 13, 2020 Monday, July 13, 2020 7:19:00 PM CDT July 13, 2020 in News
Share:
Email
Facebook
Twitter