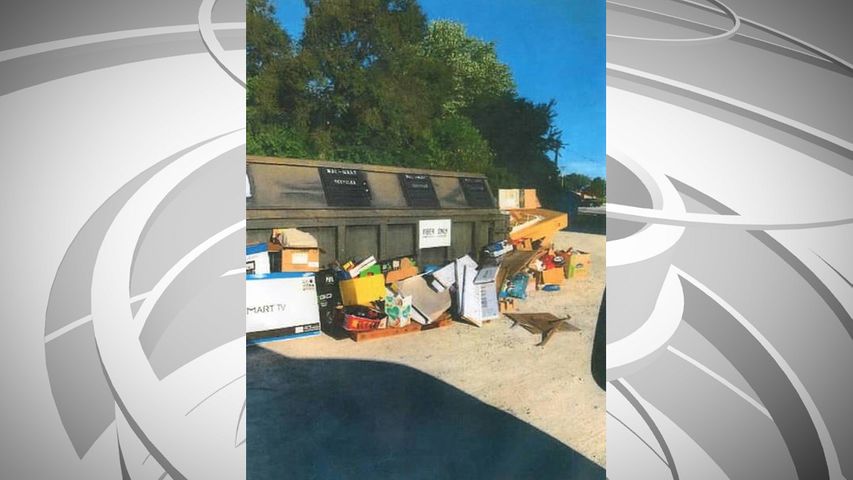 Mayor Gene Rhorer said the city has had problems ever since it started recycling. He says people abuse the recycling bins.

“When someone shows up in the middle of the night at 2 o’clock to drop off a piano or a copier or a baseball goal or a lawn mower or a baby seat, they’re very aware that these are not recyclable items,” he said.

In the town hall meeting, residents recalled seeing couches, swing sets, toy cars even television sets in or next to the recycle bins.

Rhorer said the city needs urgent change due to its rapid growth rate. According to city administrator Lyn Woolford, there are 400 homes currently being built. Rhorer said Ashland is one of the fastest growing cities in the state.

“I mean, with that kind of growth rate, we have to be on our game here at the city and make some well thought out changes, and it’s very difficult to keep up with it,” Rhorer said.

Brian Sapp went to the town hall meeting because, he said, recycling should be important to everyone, but especially for people who live in a growing city like Ashland.

One solution for the recycling problem was to leave the bins where they are but add a fence and security cameras. However, the land is being sold.

Sapp said he did not know that until Saturday’s meeting.

“I think really the biggest surprise that they talked about was where to move it to,” he said.

City officials proposed two options for the move. The first option is at the recently purchased site for a new city hall building next to Highway 63. The second is by the city’s water treatment plant.

Rhorer said in the meeting he would not support storing the bins at the new city hall building. Sapp said putting the bins there would make the location “unsightly.”

The other option for the recycling service was to transition to a curbside pick-up. There were mixed feelings about this at the meeting.

Sapp, however, likes the idea of curbside pick-ups. He said it would be easier for him and his wife to do their own recycling at home.

“On the other hand, I want what’s best for the community. So if the community says, hey, let’s go to a central location, I’d be more than happy to go along with that,” he said.

Sapp said he would support a central location if the bins get emptied regularly to avoid getting overfilled. Residents at the meeting expressed this as another concern.

He said people have a personal obligation to use the recycling bins the right way.

“They get there, they made the trip, they’ve taken the time to load and haul something over there, and then realize, oh well, the dumpster’s full. I don’t have a way to get rid of it,” Sapp said. “So we’re just going to dump it here and let somebody else worry about it. And that’s the wrong way to go about it.”

Sapp and Rhorer both said there needs to be more education about recycling.

“The more education you have, the better people can sort their items, the better chance those recycling companies have of getting that stuff to the right place, instead of it ending back up in a landfill,” Sapp said.

“I think a good educational effort is in order here to let folks know how or what to recycle or how they might sort these things out so that we can get some responsible recycling. Because when we send the recycling to the recycler, it’s dirty, it goes in the trash,” Rhorer said.

One resident at the meeting mentioned buying a new recycling bin to prevent the overfilling. Rhorer said this is an option, but he would prefer to see it in a different budget year.

“I’m not a fan of a deficit budget or expenditures or going outside the budget,” he said.

“So anytime you change a trash service of a recycling service, you need to involve the community, because, after all, the community belongs to these folks. Their input’s very valuable on what they may want to do with the recycling,” he said.

Rhorer said the city officials could make a decision about recycling within the next few months, but he said he would like to hear more from residents. The city council will hold another town hall.

Sapp said he thinks city officials try to do what is best for the majority of the community. He said Saturday’s meeting had a poor turnout.

“I know weather is part of that, but still, people who want to be informed and want to have their voice heard, it’s just like anything else, you’ve got to go out, you’ve got to get there and go to the meeting to do it,” he said.

He said he hopes for a better turnout next time.

“I’d love to see it packed to the roof, because the more people, the more opinions they get, the better decision they can make,” Sapp said.

The second town hall will be Wednesday, Sept. 19 at the American Legion in Ashland.