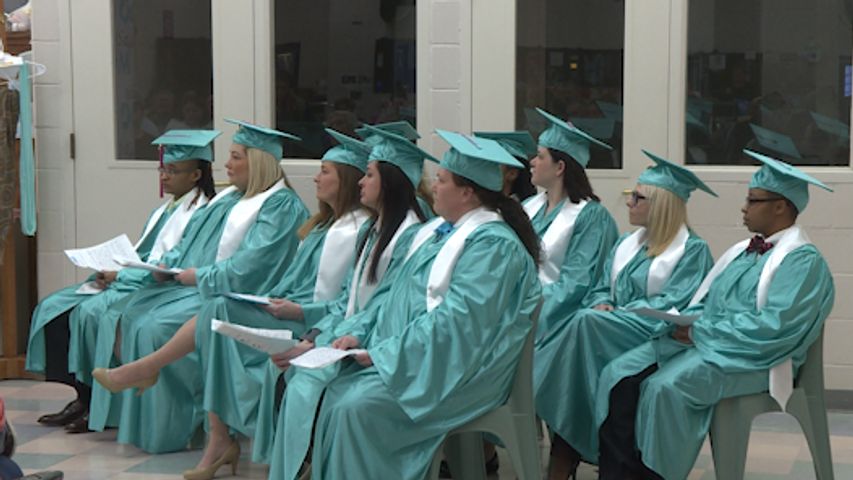 The ten new graduates of the Aspire MO program. The entrepreneurial program helps incarcerated women learn how to start their own business, interview skills and personal branding.

Aspire Mo is a one-of-a-kind program that helps incarcerated women learn how to start their own business, along with teaching them interview skills and personal branding.

The program started off as an idea between Ken Chapman, Women Offender Reentry Program Manager for the state of Missouri, and Kellie Ann Coats, Executive Director of the Missouri Women's Council.

"What was supposed to be a thirty minute lunch meeting turned into a two-hour brainstorming session," Chapman said.

This is the second class to graduate from the 20-week program. The first class graduated in June. One of the graduates, Emily Kirchhoff, who was released in August, came to support her friends.

"[The program] gave me clothes to wear to interviews, I've connected with a few other people on how to build a résumé," Kirchhoff said. "I really don't have words for how amazing this is."

Jean Solis is being released on Friday after a nine-year sentence. She said she felt very blessed to be a part of this program.

"Over the years, they've given us the information to start a business, but never taken the time of day to show us," Solis said. "When I heard about the program, I was amazed by it. Who wouldn't want to do something like that?"

Amy Lawrence has been incarcerated five times, and is expecting to finish her year-long sentence in February. She said the program has given her a confidence that she'll never be back.

"They never let me second-guess myself," Lawrence said. "I don't know what goes on behind the scenes but I know the effort is tremendous and it's not going to go unnoticed."