At least two fatalities in multi-vehicle crash on I-70 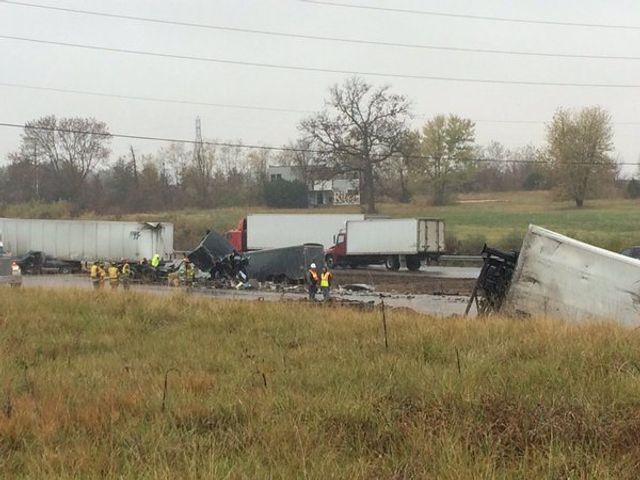 KINGDOM CITY - There were at least two fatalities in a multi-vehicle crash involving semis on Interstate 70 at the Kingdom City exit Tuesday morning, according to the Missouri State Highway Patrol.

Debris was scattered across the road, much of it unrecognizable. Missouri State Highway Patrol Lt. Paul Reinsch said three semis were involved including four other vehicles.

"You have two vehicles heading straight toward each other and the speed limit is 70 miles per hour," MSHP Cpl. Scott White said. "That is quite a closing speed, and when those speeds involved tractor trailers, that's quite an impact."

The crash killed two people and injured five others. Those injured were transported to MU Hospital.

Eastbound traffic was closed for two hours and officials detoured traffic to Highway 63, but one lane was opened around 11:15 a.m.

"We train our troopers to keep the scene safe, and we don't want any other crashes to occur, so we have that in mind," Reinsch said.

White and Reinsch said officials are no longer diverting traffic on eastbound or westbound lanes as of around 12:30 p.m., like they had been doing in the morning.

KOMU 8 News was on the scene and continually updating its Twitter feed.

#I70UPDATE: Both eastbound I-70 lanes at MM 148 in Kingdom City are NOW OPEN. Traffic moving slowly. Use caution.

One lane heading east is open to allow the existing cars backed up to slowly get through. @KOMUnews pic.twitter.com/lO2FFqg9kZ

This is the semi that is overturned. Two others are damaged severely from what I can currently see. @KOMUnews pic.twitter.com/iuO01wg257

Officials are reporting one fatality at this time. @KOMUnews pic.twitter.com/2XKpnarhnM

This is the view on the other side next to the exit into Kingdom City. @KOMUnews pic.twitter.com/DmcNbrtfTj

At least one fatality in the I-70 eastbound accident at exit 148, according to Missouri State Highway Patrol.

From what I can see, there are three semis overturned or crashed. At least two other vehicles I can see. @KOMUnews pic.twitter.com/ESrGTexT1R

This is the scene of the crash on I-70 East. All lanes shutdown going east with the west slowly moving. @KOMUnews pic.twitter.com/0lx6gnKDkx

(Editor's note: This story has been updated with additional information and to make spelling and grammar corrections as well as stylistic changes.)