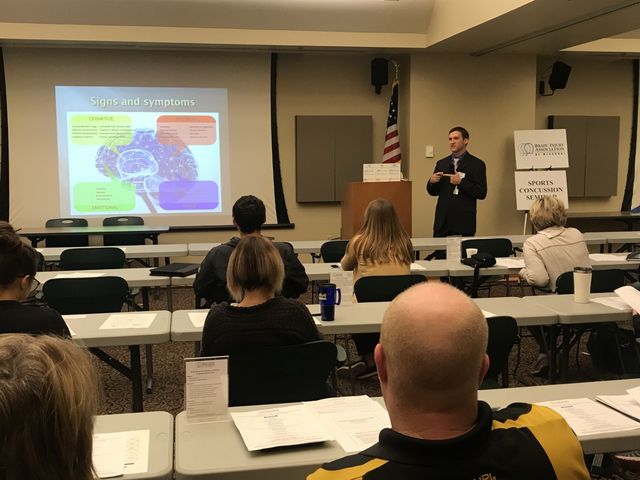 COLUMBIA- The Brain Injury Association says every 18 seconds someone sustains a brain injury.

The Brain Injury Association of Missouri hosted a Sports Concussion Seminar on Monday aimed at addressing the facts about sport related concussion.

The Missouri State High School Activities Association, which provided the venue for the seminar, reported 2, 924 reported concussions happened in the 2017- 2018 school year.

Adam Cline, Truman State University athletic trainer, has been working with athletes for 15 years. He said there are a few things athletics, coaches and others should be aware of regarding concussions.

"Things that an athlete might feel or notice is an increased headache, they might feel dizzy or uncoordinated. They might feel they have a hard time keeping up on the field or in class," Cline said.

Dominic Nelson, a former Mizzou strong safety, had a concussion during a game in 2017.

"[Arkansas] kicked the ball off, I was supposed to be doing a double team with my teammate. And the guy just picked me and ran through me. He hit me on the side of the head. I blacked out for a quick second. I got up went to the sideline and told the trainer," Nelson said.

Richaud Floyd, a Mizzou wide receiver, also had a concussion in 2017.

"The last thing I remember is catching a punt. After that, I just remember waking up in the hospital. They said I walked out the game but I don't remember that," Floyd said.

Cline said less than 10 percent of concussion result in loss of consciousness. However, he stresses the importance of reporting possible concussions.

"It can lead to rapid increase blood pressure and potentially death," Cline said.

Pete Claas, Macon High School football coach, encourages athletes to tell someone if they think they have a concussion.

"You only have one brain, you need to make sure you're taking care of it," Claas said.