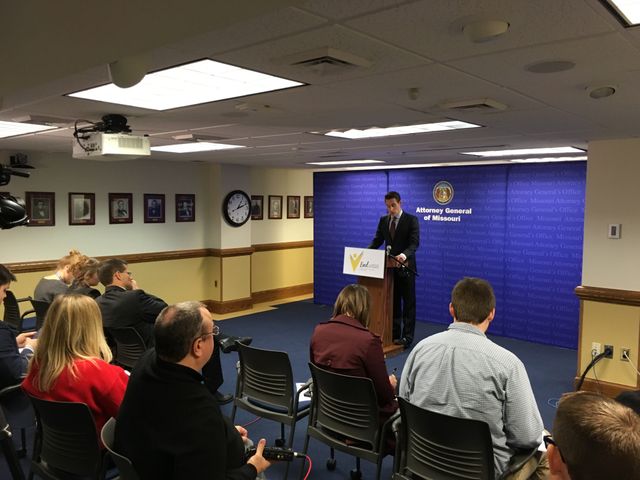 The CIDs work the same as issuing a subpoena and require the distributors to provide documents and information relevant to the attorney general office’s ongoing investigation into the pharmaceutical industry’s involvement in the opioid epidemic.

According to the attorney general, in 2015, 500 Missourians died from opioid overdoses or complications. 300 more died from heroin, another drug associated with drug abuse. Hawley said the opioid death rate in Missouri is 160 percent of the national average and is continuing to rise.

“It has become clear that opioid distributors had opportunities to stem the tide of the opioid crisis, but instead chose to look the other way while making millions of dollars in profit,” Hawley said. “Opioid distributors will not receive a free pass from my office. I am committed to holding all parties responsible for this epidemic and working toward solutions that will protect and heal our communities.”

Hawley said large pharmaceutical companies have made these drugs knowing about their addictive qualities.

“They have chosen to sell the drugs and market the drugs to doctors and to consumers by hiding or misrepresenting the true nature and addictive quality of the drugs; that was wrong, that was illegal,” Hawley said.

In June Hawley filed one of the largest lawsuits in Missouri history against three opioid manufacturers.

“Our lawsuit alleges that these companies carried out a complex, multi-year scheme to deliberately misrepresent the addictive risks of opioids,” Hawley said. “This fraud resulted in thousands of patients given unnecessary or harmful opioid prescriptions and cost the state of Missouri millions and millions and million of dollars."

In August the attorney general’s office expanded its investigation to include seven additional pharmaceutical companies. Hawley has requested CIDs from all seven of these companies.

“There is evidence to suggest these drug distributors have played an active role in directly and wrongfully facilitating opioid abuse. Federal and state laws require these distributors to report and suspicious activity. But among other facts, the sheer volume of opioids that they have delivered to multiple locations is inherently suspicious,” Hawley said. “The evidence suggests that these companies choose to look the other way, over-supply pharmacies and outlets to make millions of dollars in profits.”

This announcement comes about a week after Hawley welcomed President Donald Trump’s declaration of the opioid crisis as a National Public Health Emergency.

“Missourians have lost neighbors, friends, and family members to a crisis fueled by companies that put profit ahead of health by preying on people struggling with pain,” Hawley said. “I have launched one of the largest lawsuits in Missouri history against the companies who have engaged in this fraud, and we will hold them to account."

Hawley said Trump’s emergency order is an important step and it brings the issues to the national spotlight.

“It’s a good first step. Declaring it a National Public Health Emergency was the language the White House used, is certainly true,” Hawley said. “Those of us here who are fighting on the ground, fighting in the trenches, we welcome all the help we can get.”

NBC reported when Trump declared the opioid epidemic an emergency under the Public Health Services Act, it gave the Health and Human Services secretary wide discretion to respond by accessing the Public Health Emergency Fund, which only has about $57,000 left.

“Funds will be critical,” said Rebecca Haffajee, Assistant Professor of Health Management and Policy at the University of Michigan School of Public Health. "Congress will need to appropriate more money given the shallow resources available under the Public Health Emergency Fund.”

Hawley said the information requested in the CIDs will help determine how widespread the fraud is and whether there are other pharmaceutical companies that need to be targeted for their contribution to Missouri’s opioid crisis.