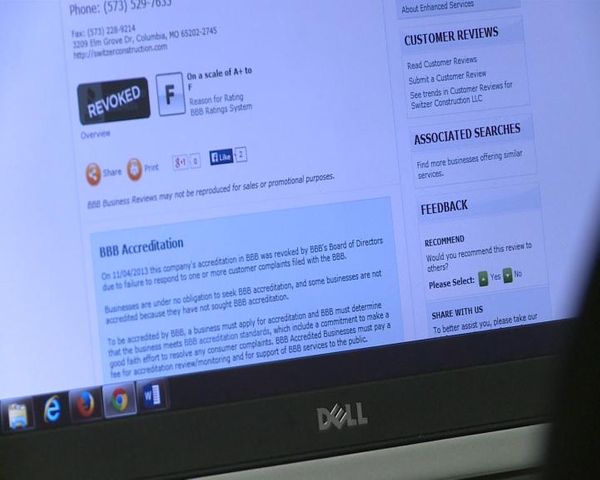 One of those companies completed work for Boone and Cole County residents.

Court documents indicate Cory Smith is a resident of Osage City, Kansas and is the owner of Switzer Constriction, LCC. The lawsuit states Smith accepted at least $21,000 from at least eight consumers in Boone County and Cole County for goods and services. As the case against Smith and the 15 other companies develops, the team working on the lawsuit expects more victims to come forward.

The lawsuit states Smith offered residential exterior restoration services, such as roof, gutter, and deck repairs. These acts violate Section 407.020 of the Merchandising Practice Act. The charges against Smith and the other contractors could become civil or criminal charges if additional information surfaces regarding the extent of the scams. The lawsuit orders Smith to pay restitution to the consumers who did not receive promised services, as well as civil penalties for his fraudulent actions.

"A lot of these folks cannot afford to fix their property until they get their money back," Chief Counsel of Consumer Protection Joseph Bindbeutel said. "When they're made whole, that's the most satisfying part."

They Attorney General's office has made contact with Smith, but Bindbuetel said "promises in this business come very, very cheap."

Regional Director of the Mid-Missouri Better Business Bureau branch Mike Harrison learned about Switzer Construction late last summer. The company was accredited with the BBB when the complaints started coming in.

"What was happening is a representative from Switzer would come out, they'd get the bid and a lot of times they were taking money up front," Harrison said. "There were sometimes they would come out and do a little bit of the work, but most of the time they would take that money and the consumers never heard from them again."

The BBB reached out to Switzer Construction. However, after calls and emails went unanswered and 11 complaints had been received, the BBB to revoked its accreditation.

Chuck and Pamela Issacson told KOMU 8 News in October 2013 they signed a $3,800 contract with Switzer Construction in January 2013. They said they hired the company to add a screened-in porch to an outdoor deck. The couple paid half the cost up front. They said crews began work, but never finished it. The Issacsons reached out to the company for several months, but emails went unanswered.

The lawsuit will develop in the coming months, but both the Attorney General's Office and the BBB offered several precautions to take before hiring a contractor:

• Ask for company references.
• Get at least three bids from different companies.
• Verify the contractor has required licenses and insurance.
• Ask for a written contract.
• Do not pay for services in advance.
• Hire local contractors.

The Attorney General said anyone who did work with any of the contractors involved in the lawsuit should file a complaint as soon as possible. Contractor fraud continuously falls in the top categories of complaints received.

Following the July storms, the office said it wants to ensure Missouri residents remember not every unsolicited contractor is an honest contractor, and to be mindful of special deals and packages following severe weather.