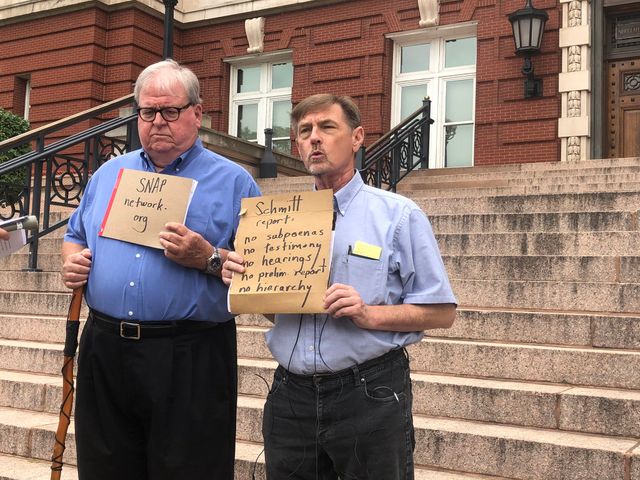 JEFFERSON CITY - The Attorney General's Office responded to criticisms by the Survivors Network of those Abused by Priests (SNAP) on Wednesday as SNAP came together in front of the office demanding answers.

SNAP released new abuse-related court documents and filled out a Sunshine Act request at Attorney General Eric Schmitt's office. The request asks for documentation regarding who the AG interviewed for information and any formal agreements signed with bishops.

"If [Schmitt's] got nothing to hide, then he should reply promptly and immediately and fully," sexual abuse victim and SNAP national director David Clohessy said.

In a critical letter to the Attorney General's Office, SNAP wrote, "law enforcement officials in neighboring states have been far more aggressive and effective than you have."

SNAP cited subpoenas In Kansas and preliminary reports in both Kansas and Illinois.

"We are convinced there is a memo between [Schmitt's] lawyers and church lawyers," Clohessy said.

Chris Nuelle, press secretary for the AG's office, sent a statement to KOMU during the SNAP demonstration. He said, "Victims have a right to be angry over the actions of  the Catholic Church and the Church's wide reaching cover up."

Schmitt announced the referral of 12 alleged abuse cases to local prosecution about two weeks ago.

Clohessy said he believes there would be more referrals if the investigation was more thorough.

"We went beyond our original mandate in this investigation, and we believe that is reflected in the report," Nuelle said.

In a press conference regarding the 13-month investigation, Schmitt said his office "identified 163 members of the Clergy against whom exist substantial evidence of sexual abuse or misconduct against minors" after reviewing personnel reports from priests serving the Archdiocese of St. Louis and dioceses of Kansas City-St. Joseph, Springfield-Cape Girardeau and Jefferson City.

"It is my sincere hope this report assists the Church in achieving our goals of accountability and transparency, while respecting the legal standards for privacy of all affected by the report," Bishop W. Shawn McKnight of the Diocese of Jefferson City said in a news release the same day Schmitt announced his investigation results.

Clohessy said there are more than 170 public reports of clergy members who have been accused of sexual abuse or misconduct against minors.

"It's both the outcome and the process that makes us highly skeptical," Clohessy said.

He said he would have expected to see more victims and experts included in the investigation.

"We are absolutely convinced that his report is...the weakest report we've seen by an Attorney General," Clohessy said.

"The Attorney General's Office sought to do a thorough, victim-centric, and independent investigation of allegations of abuse in the Roman Catholic Church," Nuelle said.

SNAP said they do not know what their next steps will be after filing the Sunshine Act request.

"We are open to receiving any additional information relating to the investigation and we still encourage victims to come forward through our hotline, which will remain open," Nuelle said. Victims can also call (573) 751-8791.