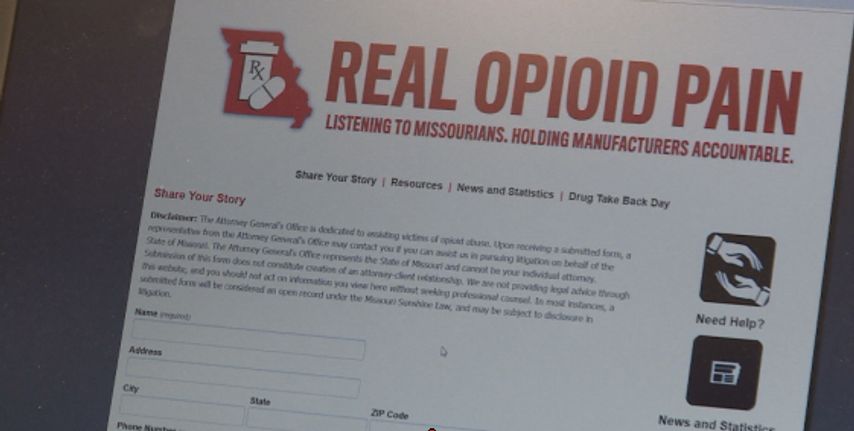 JEFFERSON CITY - Attorney General Eric Schmitt is using a new website to ask Missourians to share their real-life stories of opioid abuse. Schmitt will use the stories he collects as part of a lawsuit against three drug manufacturers.

Schmitt is requesting the testimonials from Missourians via an online form on www.realopioidpain.com. He said the input shared will play a big part in the case inherited from predecessor Josh Hawley. Hawley sued Endo Pharmaceuticals, Purdue Pharma, and Janssen Pharmaceuticals in 2017 for misrepresenting the addictive nature of opioids to consumers. The case is set for trial in January 2021. Schmitt said he has made the fight against the opioid epidemic a priority in his office.

“We believe our case doesn’t rest with the number of lawyers we hire, but the real stories of Missourians,” Schmitt said.

Schmitt said he believes Missouri is taking the lead in reaching out to the community to hear real people’s stories. Missouri’s drug overdose death rate was 23.4 per 100,000 people in 2017. The national rate is 21.7 per 100,000 people. Amy Weiland owns The Crossroads Program in Columbia, St. Louis and Kansas City with her husband. She said when people share their stories, others feel like they can do the same.

“Sharing stories makes things a little more human,” Weiland said. “If [someone shares an] experience with someone, it makes it less scary for someone to do the same and it gives a message of hope.”

The website just launched Tuesday, but Schmitt said the response has been positive.

“This is not a one or two day effort,” he said. “This is a concerted effort by our office to hear how opioids have affected them. How it’s affected their families, their friends and their neighbors; we know those stories across the state are real.”

Schmitt officially launched the Real Opioid Pain campaign in St. Louis at a news conference Tuesday. People from across Missouri traveled to testify, including a Springfield mother who lost her daughter to opioids.

“I was at a loss, you know. What do you do when your child comes to you like this?” the mother said at the news conference. “It’s like watching them drown and you can’t save them.”

Schmitt said the goal of the campaign is to encourage people to come forward because people’s real stories will be the strength of the case against the opioid manufacturers in 2021.