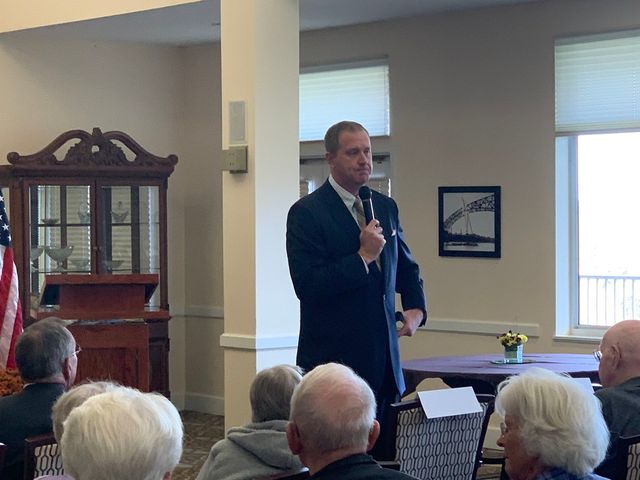 His "Senior Safety Week" tour made a stop at Heisinger Bluffs in Jefferson City Wednesday afternoon. Schmitt discussed a variety of issues including what to look out for in potential scams targeting the elderly, how to avoid falling victim to them, and what to do if you suspect you have found one.

"A lot of people are already aware of some of them, maybe not all of them, but they are becoming more and more advanced and prolific technologically," Schmitt said. "They are preying on people's vulnerabilities or saying if they don't pay the money they will be thrown in jail."

Schmitt said the goal of his trip across the state this week is to keep elderly residents safe from scammers and other bad actors.

"We wanted to make sure in our first year in office we are highlighting our role as a consumer advocate and disseminating information about the common scams around the state I just think is a core function of our office, " Schmitt said.

In recent weeks, Schmitt said his office has received an increased number of reports of scams related to government entities.

"You have the IRS scam, the social security scam, Boone County has a scam going on right now where somebody is calling from the Boone County Sheriff's Department purportedly telling people if they don't pay up, they are going to jail," he said. "This is a common theme we are starting to see where you take a legitimate agency or government or institution and try to exploit people with that familiar name."

Another common scam targeting senior citizens is what Schmitt calls the grandparent scheme. Somebody calls you pretending to be your grandchild in distress and asks you to send them money to get them out of it. LeRoy Dernier received a similar call two weeks ago.

Dernier said he immediately called his grandson to make sure he was okay.

Recognizing scams can be challenging because they will often use numbers with local area codes.

"You get calls and they've got the local number, they've got a local name on there and you think I'm going to answer it because it is someone here in Jefferson City but it turns out to someone from outside the country," Dernier said.

Attorney General Schmitt said his golden rule is if something sounds too good to be true, it probably is.

If you are suspicious whether or not a call you receive is a scam, Schmitt said the best thing to do is contact an official government agency like the IRS, Missouri Department of Revenue or the Attorney General's Office to find out if it is real.