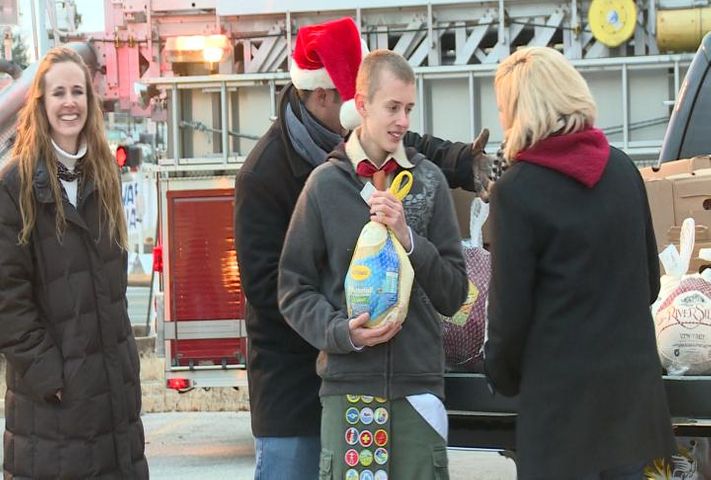 COLUMBIA - In effort to become an Eagle Scout while also helping the community, Brayden Stallons, collected frozen turkeys in partnership with the Food Bank for Central and Northeast Missouri.

When the 14-year-old Rock Bridge High School freshman got to the annual One For One Holiday Food Drive in Columbia with 135 turkeys to donate, it was obvious he was proud, excited, and compassionate.

"It's been very challenging, but if you set your mind to it, you can conquer it," Stallons said.

The food drive lasted from 6 a.m. until 6 p.m. on Wednesday. Executive Director of the Food Bank for Central and Northeast Missouri Lindsay Lopez said a lot of the volunteers worked all day.

"We have a number of them [volunteers] that were here with us at the beginning of the day and will be here until the very end. I have to absolutely commend the Columbia Fire Department for the work that they've done as volunteers for this effort. It's just absolutely incredible, " Lopez said.

With the help of Brayden's turkeys, the drive collected enough food or money to buy food to cover 1,456,180 pounds of food, which is more than the year prior.

"It makes me feel really good just knowing that I helped that many families," Stallons said.

With various behavioral and other therapies through the Thompson Center and dedicated learning specialists at school, Brayden has developed from a nonverbal 4-year-old into a focused, hardworking teen leader with plans to work in technology after college.

Stallons said he doesn't have much more to do to fulfill his dream of becoming an Eagle Scout.