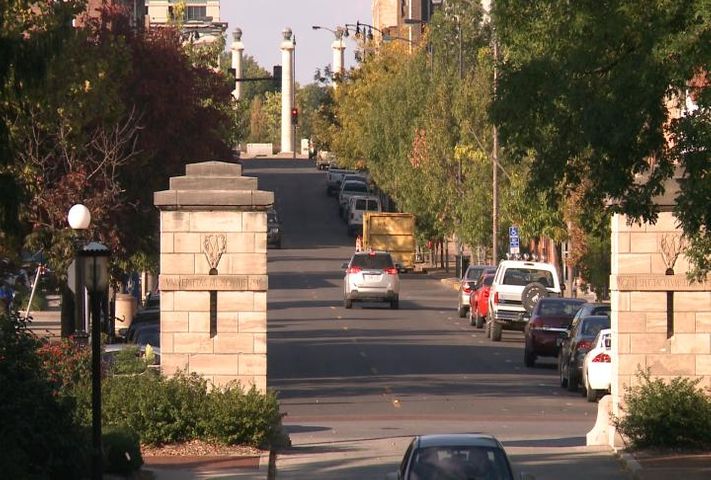 COLUMBIA - The Public Works Department is working on its Avenue of the Columns project, a multi-year project which requires several phases of construction along Eighth St.

The department's street division removed a sidewalk on Eighth St. next to Bank of America Thursday morning.

"We're removing the sidewalk and putting in an ADA compliant [one] to go with the theme of the Avenue of the Columns project," Sapp said. "We'll be using some pavers as well as specific tree grates."

The Public Works Street Division worked at the intersection of Eighth St. and Broadway this summer and finished up last month.

"After we put down the new crosswalks with pillars, our traffic engineers noticed that some of the pavers were starting to break up," Sapp said, "low volume pavers that weren't able to handle the traffic volume and some other issues that needed to be remedied."

Residents who live in the lofts above this intersection said the construction has been hard to live with.

"It honestly sucks," Jackie Dicarlo said. "I can get used to the traffic noise but waking up to a jackhammer every morning is a little difficult to get used to. At least warn us and don't start before 7 a.m."

Sapp said he is aware that the construction upsets people.

"It's noisy, it's a little dusty and we try to mitigate that as best as we can, but we do have a number of projects in downtown that we need to take care of," Sapp said.

"The ground will literally shake, we can feel our doors shaking and I can hear their conversations from our apartment upstairs, so it's really frustrating," Champion said. "Crossroads are blocked off and there's cones everywhere, and it's just a big mess basically."

Sapp said the department typically does not allow its contractors to start before 7 a.m. and will continue to try not to bother businesses and residents.

"The whole Eighth St. is expected to look the same when the project is completed," Sapp said. "But we can't pinpoint an exact completion date."