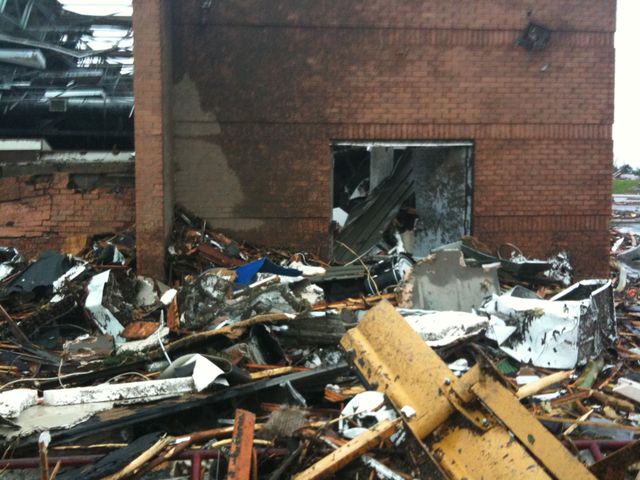 JOPLIN - It's 4:00 p.m. Joplin High School band practice is about to start. High school kids are starting to set up the drums on the stage. Two kids are throwing a football back and forth on the floor beneath the stage, dodging the two volleyball nets. Five kids are sitting and talking in the auditorium sitting next to the stage.

A couple minutes later, the drumline can be heard behind the stage curtain, the trumpets can be heard in the hallway, and the color guard can be seen twirling their flags on the gym floor. This is the story of the band's after school practices.
Since the tornado hit in May, finding a place to practice was the least of band director Rick Castor's worries.

"That first night, I was like, I don't know how I am going to do this," Castor said.
He lost everything. Instruments, music, stands, trophies and so much more.

Since that day, many people have lent a hand to the band.

"Diana Williams, the band director from Webb City called me just as soon as I hung up from my mom and that was the last call I was able to get and said...'What can we do for you?'" Castor recalled.

Bands from all over the country have donated to the band. For a time, Castor's house was filled with instruments that flooded into Joplin with nowhere to go. Now, they have everything they need for competition.

Practicing for competition has been quite the battle. "Now, we have to load all of our equipment every morning, then we have to go to the stadium, we have to unload, the practice, then load everything else come back here, then unload everything. We have to do that everyday. I am so proud of the kids, not once have I heard them complain. Not once," Castor said.

It was not the senior year that Chris Phillips had in mind "I was thinking maybe I would go through senior year take it easy...it's been a lot of hard work," Phillips said.

It was an emotional moment for Phillips when he found out his high school was destroyed.

"Everything I knew was gone. The best years of my life were in that building," Phillips said.