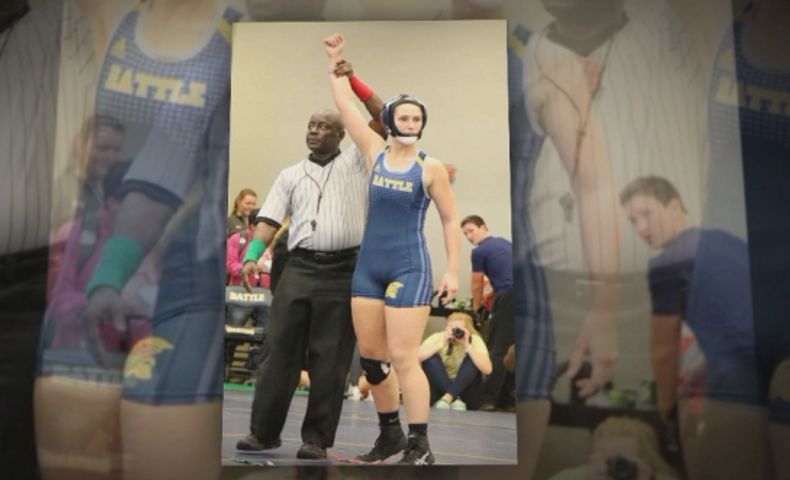 "It's been life-changing wrestling and being part of a team or the first ever here at Battle or in CPS," Reed said.

Reed signed to Westminster College Tuesday night. She plans to study education and become a teacher.

"That was my number one school before wrestling, and I cried when I got accepted into Westminster a couple months before I even started wrestling. It was a sign when they added girls wrestling this year," Reed said.

"When girls from softball were seniors and they signed, in my mind I thought I would never have that day. I didn't see myself as a great softball player," Reed said.

After a successful season in wrestling, including competing at the state competition, Reed finally had her day.

"It's surreal to have this moment today and actually sign," Reed said.

"My first response when she told me she wanted to wrestle was like, 'No way. You're not wrestling with guys.' Taylor's accident prone, so I was like 'Oh no, I can see it now,'" Shaw said.

However, Reed was persistent. Her mom became her biggest supporter and encourages other parents.

The Missouri State High School Activities Association made girls wrestling an official high school sport in May 2018. This is the first year girls have been able to compete on their own wrestling team.

Being the first comes with some challenges. Reed said she struggled to help girls who looked up to her because she was still learning.

"I wish I had the exact answer for them, but at time, I didn't. It pushed me a little more. I wanted to be that person later on in life that will be able to help coach other girls and inspire them to wrestle," Reed said.

Her teammate, Jasmine Westendorf, is a sophomore wrestler who fought back tears during the signing day.

"I really look up to her. It makes me really happy that she tried so hard," Westendorf said.

"I look up to her to be the second girl to sign from Battle High School for wrestling," Westendorf said.

Reed plans to go back to Battle to coach as well.

"I love Battle. I will always be a die hard fan of Battle because it has made me who I am today. I'd love to come back here and work with the amazing people," she said.

She said her main focus in college will be her education.

"I'm still going to have to be a student first," Reed said.

She is looking forward to continuing her wrestling career.

"In college I hope to have the same type of experience I had in high school, but it will be nice because it won't be just for one year. I'll have four years left, which is amazing," Reed said.

Reed received a partial wrestling scholarship to Westminster that will cover the majority of her education.