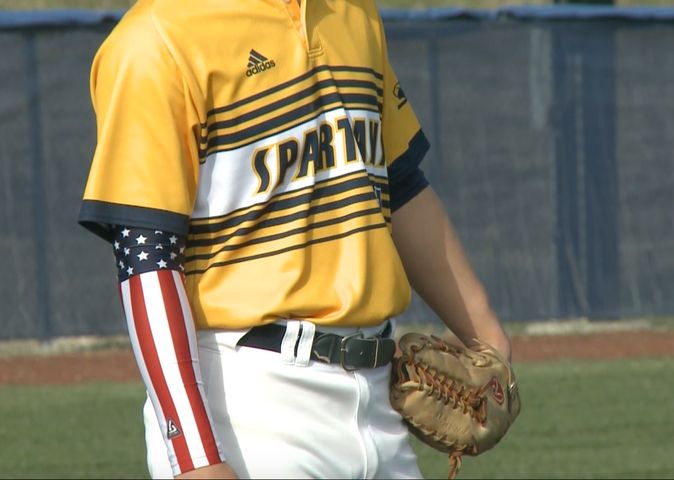 “Putting military in front of baseball, they have to protect us in order for us to play,” Battle baseball coach Doug Boyer said. “We’ve had a chance to engage in freedoms like baseball, and military have provided us with those freedoms.”

Boyer showed his appreciation by presenting Central Missouri Honor Flight with a $1,000 check funded by the baseball team’s t-shirt sales. The money will allow veterans to fly and visit several war memorials.

“It shows the players they should be respective of those folks and grateful for those guys that paid the price for us to ultimately play the baseball game we all love,” Boyer said.

Military appreciation night also held significance to starting pitcher Zech Shaffer, who is considering following his family’s footsteps and enlisting in the navy.

His sister, Makaila Monson, is actively serving in the navy, while his father, Jeff Shaffer, had served in the army for multiple years as a military policeman.

“I’m really considering going to the navy to keep the family in that direction,” Zech said.

Jeff had an opportunity to toss the game’s first pitch to his son, a moment that the two will remember for a lifetime.

“It was a great experience receiving the first pitch, and it was pretty special knowing that my dad helped out our country,” Zech said. “It was really good to see the old man throw the first pitch to his son that’s possibly going to go in the service as well.”

While Zech left the game in the third inning in Battle’s only loss of the week, he was grateful for the large turnout and community’s support in recognizing past and present military.

“With all the veterans we shook hands with after the game, they did a lot for you when you’re here just living an average normal life,” Shaffer said. “Hopefully I can be in that line of people to shake hands with in the future.”