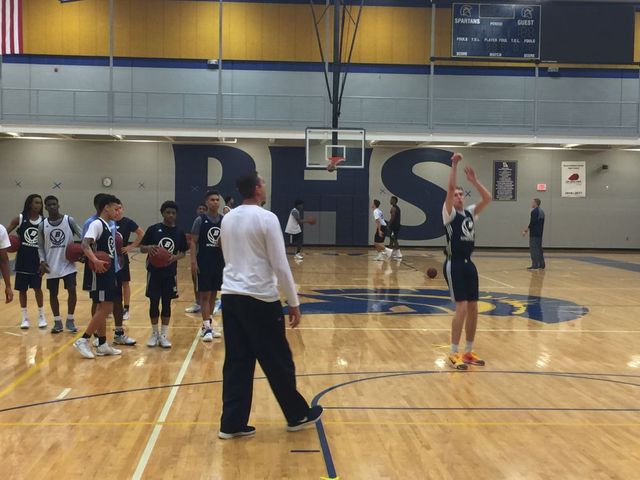 COLUMBIA - Regardless of the result of this year's district tournament, the 2017 Battle Spartans basketball team will go down as a historic team in the school's short time in existence.

"We started the year 0-6," Head Coach Brian Meny said. "Then we moved up a couple of the younger kids, and we're 10-9 [since then]. I'm not going to say it's just because of those kids who moved up, but maybe the chemistry was better."

In his 23rd year as a head coach, Meny accepted the job at Battle last May, after former coach John Burns resigned following the 2015-16 season. Meny came from Palmyra, where he posted a 71-38 record and led the school to four consecutive winning seasons for the first time in over 30 years. Before Palmyra, he coached at Van-Far, where he lead the Indians to the 2002 Class 2 State Championship

Meny inherited a team that had won just 16 games in the program's first three seasons combined. A big part of the turnaround can be attributed to the senior point guard, and team captain, Daviante Ostrander. This year, Ostrander had more assists than in his first three years put together, becoming the floor general for the Battle offense.

"I didn't think we would [get to 10 wins] because of our history," Ostrander said. "But we all just came together."

"We're proud of the way he's come along," Meny said of Ostrander. "He is the leader. He is the face of Battle basketball."

Coach Meny isn't the only member of the Meny family making the adjustment to a new environment in Columbia. His son, Trae, came with him from Palmyra. The junior shooting guard was a Class 3 all-State player as a sophomore last season.

"The biggest change has been the environment," Trae said. "It's a lot bigger here, going from Class 3 to Class 5. A lot more competition."

This isn't the first time Coach Meny has had a son suit up for him. His oldest son, Trevor, played under him at Palmyra, and now plays at Quincy University in Illinois.

"People don't really understand how hard as a dad or a coach you are when you have to go home with that guy," Meny said. "We try to make him a better basketball player each and every day, but more importantly, in our whole program, we're trying to make them better men."

Now with the regular season complete, the Spartans focus turns toward winning a district championship. Even if Battle falls short of a district crown, the future looks bright for the young program.

"They can accomplish a lot as long as Coach Meny is here," Junior guard Alex Smith said. "They can get a couple more district titles, and maybe bring in some more top players."

"I can see this program eventually being on the levels of a Rock Bridge, the Hickmans," Meny said. "So once you get your routines, your procedures in place, it's very unlimited in what we can accomplish."

Battle will look for its second district title in four seasons this week when they open the Class 5 District 8 tournament against Holt at 7 o'clock Tuesday night.