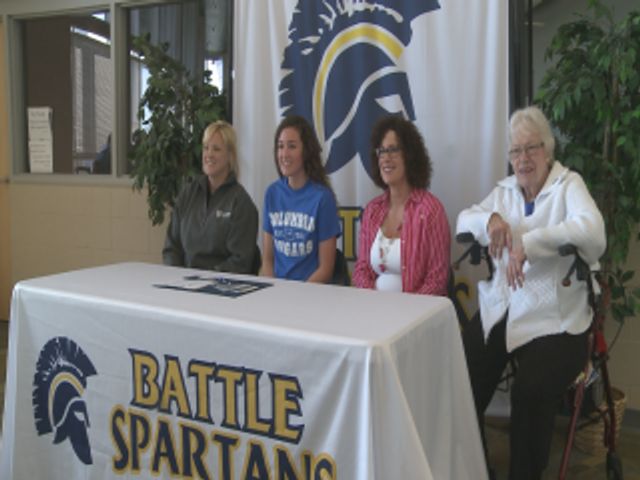 COLUMBIA - When Michaela Karrick signed to play volleyball at Columbia College, it was the start of another generation continuing the legacy started by her grandmother.

Gertie Combs was a physical education major at the University of Missouri back in the 1950's.

"We had to try out for teams of all kinds. Field hockey was my favorite, but you had to earn points in each sport in order to earn a letter," Combs said. She did earn a varsity letter, but female athletes were not awarded the classic letter jackets until 1992. Combs helped to spearhead an initiative to award jackets to former female letter earners. Jackets were finally presented to more than 200 women during Homecoming Weekend in 2015.

Melanie Karrick says her mom's fondness for athletics stuck with her. Melanie's parents helped to started a community softball league when she was young. A former track star, Melanie decided to walk onto Columbia College's softball team her junior year. She knows firsthand what her daughter, Michaela, will face as a college athlete.

"It was all about time management, doing classes. I worked, also, waiting tables. Being part of the team, it was just a matter of keeping all of that balanced," Melanie said.

It did not always seem like Michaela would follow in the footsteps of her mom and grandmother. She stopped playing any organized sports around age 9, but as a freshman in high school she decided to try out for the volleyball team. She made varsity after one year of playing.

Michaela decided to pursue college athletics when she realized how much her coaches believed in her.

"She personally has a very strong work ethic, and that's one thing every coach has recognized," Melanie said.

Michaela knows how important empowerment through athletics has been for the women in her family.

"When women can show that they're just as good as men, just in different ways, and doing the same things... I think that really shows that women have power," Michaela said.