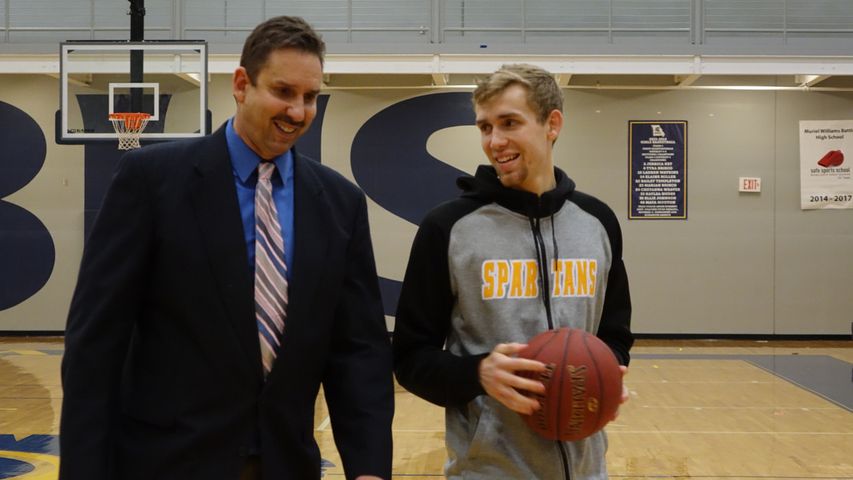 COLUMBIA – A breakout season for Battle High School basketball positions the Spartans one victory away from their second consecutive district title.

“I want that to become the expectation here,” Meny said. “Our goal is to win a district championship, and if we go back-to-back I think it would be really special for these kids, the community and our school.”

The championship stage is nothing new for Meny, who coached Van-Far High School to a 2004 Class 2 state title. Meny has also won 464 games over 24 years coaching with Van-Far, Madison, Palmyra and Battle.

Meny inherited a Battle program that had never won more than nine games in a season since the school opened in 2013. His first season was a step toward progress, as Battle overcame a 0-6 start to win a dozen games.

“I think the thing we had to change first was the culture,” Meny said. “We came over here with the mindset we were going to win like we did other places and put kids in a position to be successful after basketball.”

The coach’s middle son, Trae Meny, has played a significant role in the turnaround. The senior started 54 straight games over the past two seasons and eclipsed 1,500 career points in Mid-February.

“I have kind of seen where it started from, and now get to also see it grow,” Trae said. “Not only do I get to share this moment with my teammates and my coaches, I also get to share it with my father.”

After a 28-point Senior Night performance in his final home game, Trae followed up with 13 points in the Class 5 district opener against Troy-Buchanan.

“We’re having a lot of success right now, and he brings a lot of energy coaching,” Trae said. “That has transferred over to us wanting to play at a high level.”

Trae will forward the role of coach’s son to his brother Tristan, who finished his first junior varsity season and traveled with the varsity team to districts. It was an experience that has been passed on by the family’s oldest brother Trevor, who plays basketball at Quincy University.

As seasons pass, Brian faces the reality that he has only one more son to coach.

“You’re around your kids a lot and that type of atmosphere, and it only hit me a couple of weeks ago.” Brian said. “But I got my youngest one coming, and I’ve seen all my kids getting better every day.”

With multiple college basketball offers on the table, Trae is currently weighing his options for next fall. Brian hopes to support Trae’s college transition similarly to his oldest brother by attending games for both around Battle’s schedule.

“I’ll be able to just sit in the stands and watch him and enjoy that aspect of it,” Brian said on Trae. “It will be another chapter he is going to go forward with, and I’ll enjoy watching that chapter unfold.”

Until then, Brian and Trae will have an opportunity to defend last year’s district title. Battle will take on tournament host Holt in the Class 5 District 7 championship on Thursday at 7:30 p.m.