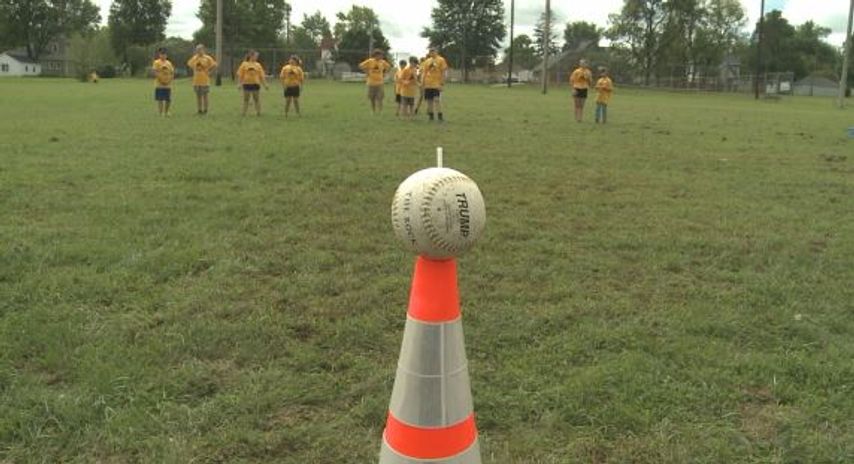 ELDON — One woman's vision has left dozens of kids all across Missouri happy.

Angela Meadors, who teaches visually impaired kids in eight school districts across mid-Missouri, has wanted to bring an event to the area for her kids to enjoy for years.

That event was beeper ball.

"I really wanted to plan something like this for a while because a lot of my kids, they're the only one in their whole district who is blind or visually impaired," Meadors said. "So they don't have a lot of time or opportunities to be around other kids who are visually impaired."

Beeper ball is designed to allow children who have seeing disabilities play a modified version of baseball. Each kid is assigned a "helper" to aid them in fielding and running to the "bases."

The rules of the game are simple: a softball with a built-in beeper is put on a tee. There are two bases on the field. Once a kid hits the ball, he or she must run to the base that is ringing. If the kid makes it to the base before the defense can get the ball, his or her's team gets a point. If the defense gets the ball first, however, the kid is out. Teams alternate at-bats until the three-inning game is completed.

The first tournament happened in June, with more than 30 kids from across the Midwest attending. The first event was so successful that a second one was held Saturday, Sept. 17 with about 15 kids from across Missouri.

"When we did this in June, it was almost hard not to cry because I have kids who have to go watch their brothers and sisters play little league and they've never gotten to play before," Meadors said. "And after the event in June, one of my girls said 'mom, I was an all-star today.' It was amazing."

After a successful first season, Meadors hopes this event can continue on for years to come.

"It will definitely be an annual event, if not a couple of times a year," Meadors said. "I'm also trying to think of other opportunities. I'm looking into a game called goalball, which is similar to soccer. I just really want to make us an organization that comes together as many times a year as we can and let these kids continue to make friends and relationships."