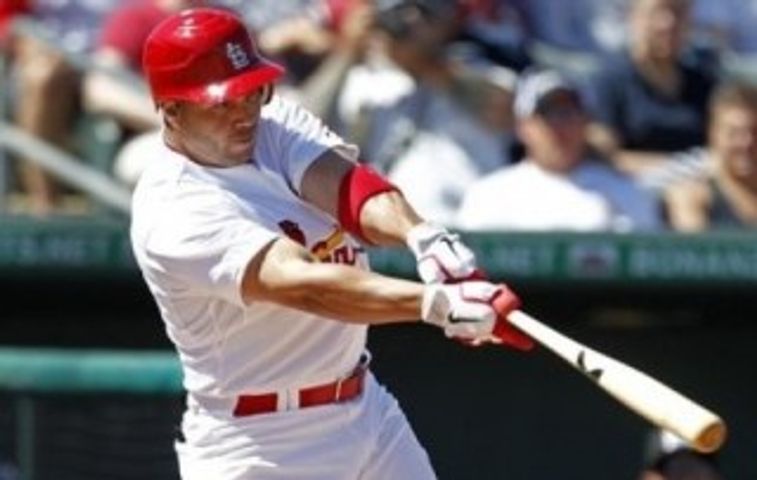 ST. LOUIS (AP) -- Carlos Beltran drove in a career-best seven runs with a pair of three-run home runs and RBI single in the first three innings, leading the way as the St. Louis Cardinals punished A.J. Burnett and the Pittsburgh Pirates 12-3 on Tuesday night.

Rookie Lance Lynn (5-0) joined Steve Shields as the major leagues' only five-game winners, allowing three hits and two runs in 6 2-3 innings with six strikeouts to beat the Pirates for the second time in three starts. Lynn has a 1.61 ERA as the replacement starter for Chris Carpenter, sidelined indefinitely with nerve issues in his right shoulder.

The runs allowed topped Burnett's previous worst of nine on four occasions, the last time Aug. 26, 2011 at Baltimore. He allowed 12 or more hits for the seventh time, exiting one shy of his career worst Aug. 3, 2011 at the Chicago White Sox.

Pirates catcher Rod Barajas was ejected for complaining about home plate umpire Angel Campos' calls in the second inning, tossing his mask in disgust after a pitch called a ball for a 1-2 count against Beltran. Manager Clint Hurdle was subsequently tossed for defending his player, his first of the season and sixth in his second season with Pittsburgh.

Beltran entered in a 3 for 32 slump with one double and three RBIs his last nine games. The slump started three games after he was moved to cleanup. He said after batting practice that he hadn't been seeing the ball well but several times added that it was nothing to worry about, then turned it around with his first swing, a three-run shot to right that made it 4-0.

Beltran had an RBI single in the second before launching another three-run homer in the third that made it 12-1, a drive to left center for Beltran's team-leading seventh homer after a replay overturned the initial umpire ruling and justified fireworks and a sign in the shape of a truck grill that blinked its headlights even though Beltran initially had to put the brakes on at second base.

Beltran topped his previous RBI high of six and he added a broken-bat single in the fifth to match a career best with his 21st four-hit game.

The top four in the lineup - Rafael Furcal, Jon Jay, Matt Holliday and Beltran - were a combined 9 for 9 with two homers, 10 RBIs and seven runs the first three innings. Jay had three hits and was hit by a pitch his first four trips and is batting .429 with an 11-game hitting streak.

Furcal singled twice with a steal and sacrifice fly, Holliday had two hits, a walk and an RBI and the Cardinals got triples from Daniel Descalso and Matt Carpenter, who had three hits.

The Cardinals have outscored the Pirates 22-8 the first two games. It was the most lopsided loss for Pittsburgh since a 15-1 whipping at Los Angeles Sept. 18.

The NL Central leaders have won five of six and will go for a three-game sweep Thursday with Jake Westbrook (3-1) opposing Erik Bedard (1-4). The Cardinals have outscored their opponents by 65 runs, best in the majors, after 24 games.