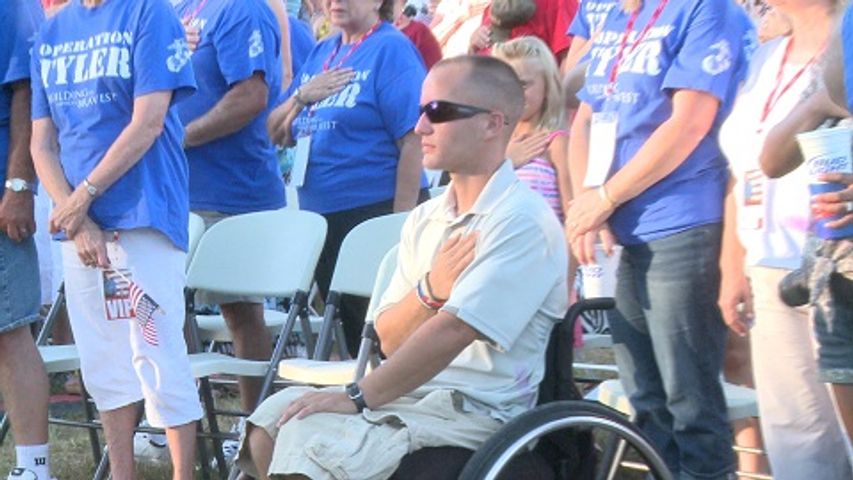 CENTERTOWN - Mid-Missourians gathered Friday in Centertown to help make life a little easier for a paralyzed veteran of Fulton. Several local organizations, the Tunnel to Towers Foundation, and the Gary Sinise Foundation held a benefit concert for Tyler Huffman. The proceeds will help finish a "smart home" for Huffman and his family.

The former marine contacted numerous organizations after he was disabled during his tour in Afghanistan in 2010. The Tunnel to Towers Foundation and the Gary Sinise Foundation originally told Huffman it might be a year or more before they could help him. But community leaders stepped in, beginning Operation Tyler and offering Huffman a plot of land for his new home in Jefferson City.

Huffman said he was very grateful for the community's support.

"It means a lot. I can't ask for a better community to be in. It makes life on me a lot easier to have a house that is set up for me. So I mean to have this done it means a lot," Huffman said.

A tribute was also given for Columbia's fallen solider Sterling Wyatt. A painting made during the opening songs was donated to Wyatt's family.

In a press release, Frank Siller, Chairman of the Tunnel to Towers Foundation stated, "Our hearts and prayers are with the Wyatt family."

Operation Tyler set out to raise more than $400,000 to build the new home. Huffman's smart home is about halfway finished. Huffman and his family hope to be moved in by Veteran's Day.