Benefit Dinner and Auction for Epileptic Child Set for Saturday 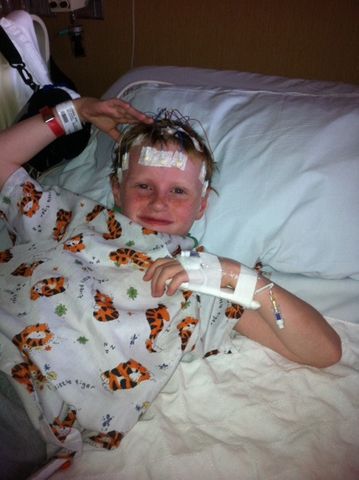 BOONVILLE - Isiah Forbes isn't any different than any other 7 year old. He goes to school, and loves coming home to play Trouble with his family. But some days, life isn't that easy.

Isiah was diagnosed with Childhood Absence Epilepsy two years ago. For Isiah, that means he has seizures that last about 10 seconds at a time everyday. Some days he will only have one of these episodes, but other days, he will have as many as 50 seizures. He also has to take medicine every day to better regulate his epilepsy.

It also means that Isiah has a mass situated behind his brain that doctors aren't sure they can remove. The mass sits behind directly underneath Isiah's brain, in a spot that is just tough to reach. Instead of operating and removing the mass, doctors have advised Isiah's parents to regularly check the location and size of the tumor through MRIs.

In December, Isiah and his family will head to St. Louis where he will undergo another MRI. If the mass behind his brain has increased in size, doctors have already warned the Forbes family that Isiah will have to have immediate surgery to remove the mass. Even if the mass has not increased in size by December, the tumor will eventually have to be removed. With the surgery looming sometime in the near future, Isiah's parents worry the price tag is just too much for them to afford. To help pay this bill, Isiah's parents are asking for help from the community.

"It's just too much. We paid out of pocket last time - the hotel, the gas to and from, the medical costs themselves - it all just adds up," said Ryan Divine-Forbes, Isiah's mother.