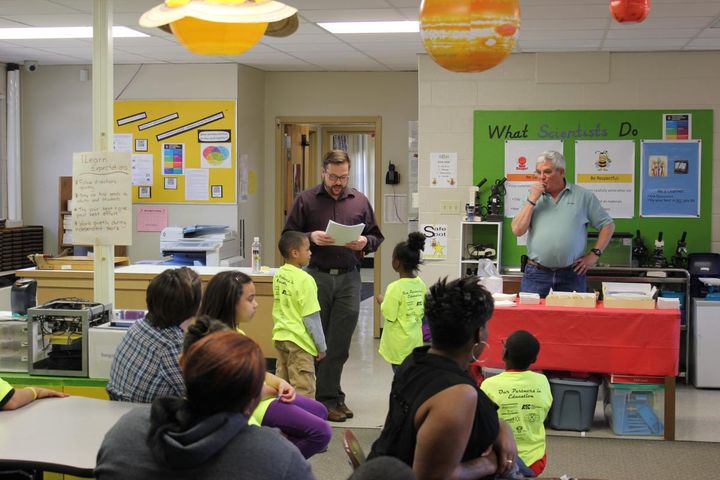 Becoming a small autonomous school, like magnet schools Ridgeway Elementary and Lee Expressive Arts School, would give them that opportunity. Some concerned parents attended the Columbia School Board meeting Monday to show their support for the possible project.

The concept of small autonomous schools was first presented to the Columbia Board of Education in 2010 by then-assistant superintendent of elementary education Peter Stiepleman. Small autonomous schools are still public schools, part of the school district and must follow the same federal and state guidelines as regular schools, but have independence in staffing, budget, curricular materials and assessment, governance and school calendar, according to Columbia Public Schools.

The STEM specialist at Benton said the school is most interested in the curriculum freedom.

"With our STEM program, we're looking to do things a little bit differently," said Dr. Heather McCullar. "A lot of that means changing either the curriculum tools that we're using or changing the instructional practices that we're doing. It's kind of hard to make those changes when you're still needing to follow along with the same guidelines that the other schools do."

Parent Brian Jackson said the STEM program and the possibility of becoming an autonomous school was a big reason he enrolled his son at Benton two years ago.

"Everyone's really excited when there's a chance that 'my kids could really learn more' because of the autonomous schools program in conjunction with STEM," Jackson said.

But Benton's transition's is on hold from the Columbia School Board. Michelle Baumstark, community relations director for Columbia Public Schools, said the STEM program is still too new to transition into autonomy.

Baumstark said Benton is still in transition as new programs and STEM curriculum are implemented, but Jackson and McCullar said their school is ready for the next step.

"We've been doing it for about four years now," McCullar said. "I think we're getting to that point where we're ready to continue to step outside the box and think outside the box in terms of how we teach. We've already made lots of changes, and we're starting to see good growth with our student scores. So I think now is kind of the time for us to keep looking into more changes."

Jackson said, "Back in March of 2014, when my son was in kindergarten, they announced that the autonomous school program was on hold. At that time, they were going to be looking for a new superintendent, so there was going to be a transition in leadership. So we totally understood that. We came back this year and kind of asked about it, and it was still on pause. We realized that time is ticking as it keep going on."

Baumstark said she doesn't have a timeline for when autonomy might be implemented.

"Now's not the time," she said. "We're not saying never. We're saying not yet. We've got to get to a point where those program implementations are not necessarily new program implementations. It's something that as soon as we feel like we're in a good position, we've got the curriculum in a good place, that everybody is focused and doesn't feel like we're pushing another thing onto them, we can move forward."