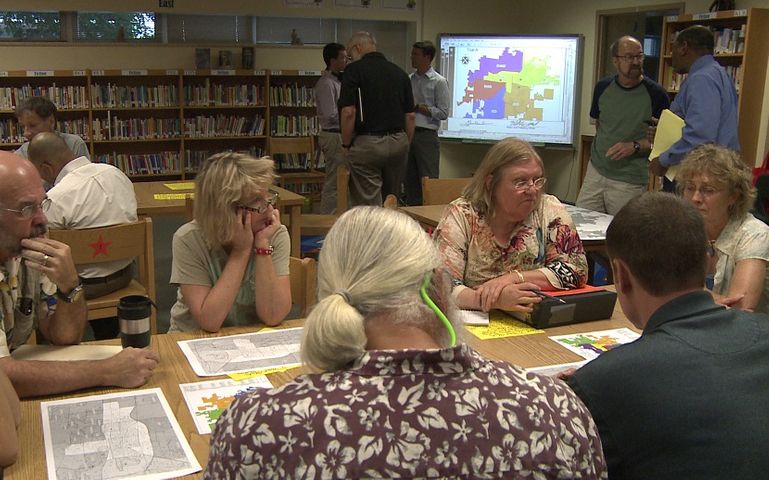 COLUMBIA - The Benton-Stephens Neighborhood Association convened at 7 p.m. Thursday in the Benton Elementary School library to discuss the city's plan to reapportion Benton-Stephens from the Third Ward to the First Ward. The meeting was held in preparation for a public hearing by the Reapportionment Committee scheduled for July 14.

Columbia City Council appointed the Reapportionment Committee to remap ward lines after the 2010 census showed an imbalance in ward populations.

Of the proposed plans, the committee favored Trial A, which would expand the First Ward both east and west to include Benton-Stephens. Trial A will be presented at the public hearing.

Benton-Stephens Neighborhood Association president Kip Kendrick moderated the discussion, and a moment of laughter occured after he asked meeting attendees if they saw any positives in Trial A.

"I tried to pull positives and negatives out of the crowd as far as what people were feeling. The negative aspects and concerns of moving to First Ward oughtweighed the positive by quite a bit," he said. "It was a little difficult to pull the positive out, but it's important to discuss both, to brainstorm both."

Two main concerns discussed at the meeting were political ramifications of Trial A and the speed with which plans to implement it are proceeding.

Many attendees were concerned that moving Benton-Stephens to First Ward would homegenize the voter population, and while elections might be easier, there would only be one representative presenting the issues of that population. Another concern was that the population increase in the First Ward to about 19,000 (other wards have about 17,000 to 18,000 residents) would dilute the vote.

Many attendees were also concerned plans to put Trial A in motion are proceeding too quickly.

"I hope the discussion continues. Plan A is the only plan being brought forward by the Reapportion Committee," Kendrick said. "I believe we need to slow down the plan to move plan A forward and really have a debate and make sure this is the plan that makes sense not only for Benton-Stephens, but for Columbia as a whole."

The Reapportion Committee will present a final plan to the City Council no later than Sept. 15.