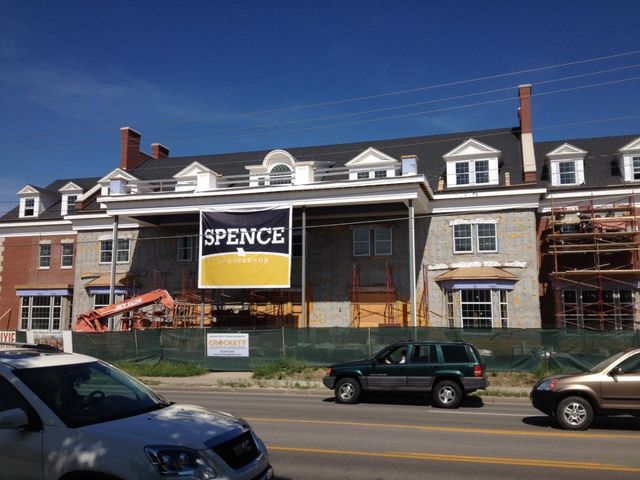 COLUMBIA - Beta Theta Pi fraternity on the MU campus found itself in the middle of a political argument between current governor Jay Nixon and candidate Dave Spence Wednesday. Spence, a former Beta member and a main contributor to the new fraternity house currently under construction on College Avenue, requested that a sign supporting his campaign hang from the top balcony of the house last week. The contractor of the house, a former Beta himself, agreed.

Tuesday, the clash between Nixon's staff and Spence's staff kicked off with a phone call from Nixon's spokesperson Sam Murphey, who, ironically, is also a former Beta. Murphey allegedly requested that the banner be removed, adding that the Beta house could lose its tax exempt status should it fail to comply.

Wednesday, the sign was taken down, rolled up, and left in the basement of the house. According to Beta representative Bill Toalson the banner wasn't removed because of a threat from Nixon's office, but rather because some local alumni were uncomfortable with the house seemingly affiliating itself with a candidate.

However, Spence's campaign manager Jared Craighead didn't buy it. According to Craighead, it's a remarkable coincidence that within 24 hours of Murphey allegedly threatening Beta house to remove the banner, it came down. Craighead went on to call Murphey's actions "without character and illegal."

Spence has donated $1 million of his own money toward the construction of the house. Spence is the current head of the capitol committee, which is trying to raise a total of $10 million for the house.

Governor Nixon and his staff were unavailable for comment and didn't immediately return any phone calls.