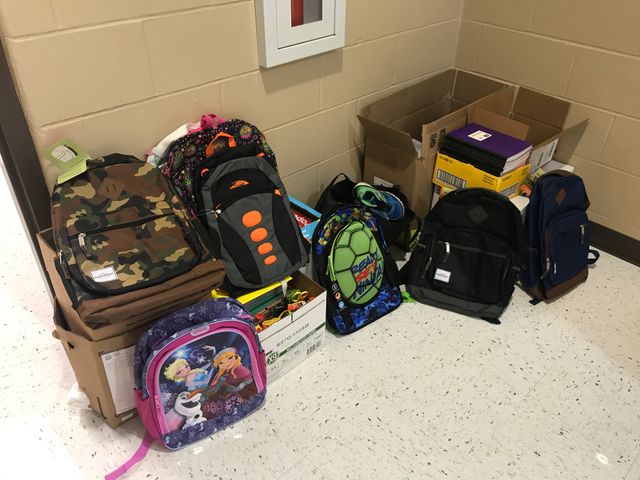 "Last week, I started contacting different schools in the Houston area to see if they wanted some help and wasn't sure what kind of response we would get," Majerus said.

He said the result was overwhelming. Several schools in the Houston area told him they needed school supplies and every day necessities. He reached out to other CPS elementary principals to see if they wanted to help.

Mill Creek Elementary Principal Tabetha Rawlings said, "We've had parents that have brought in tons of stuff. We've had children bring in things. We have a very generous community, and they always want to help."

Majerus was in contact with Matthew Salley, the principal of Kohfeldt Elementary in Houston, who put together a list of needs from several Houston elementary schools. Salley said students and teachers have been displaced, losing their entire homes and their belongings.

"A lot of kids in our area are on free or reduced lunch due to socioeconomic status, and our biggest concern was how are they eating, and what can we do," Salley said

Salley said three of schools in his district had water in the building and are still not back in session. Kohfeldt Elementary was one of several schools not affected by the storm that had to pick up 1,600 kids and 200 teachers and relocate them into new classrooms.

The 14 Columbia elementary schools will be collecting goods until Sept. 19. Majerus will be delivering a truck full of items down to Houston with his son on Sept. 22.

Majerus and all CPS elementary schools participating are welcoming any donations from community members, faculty or students.