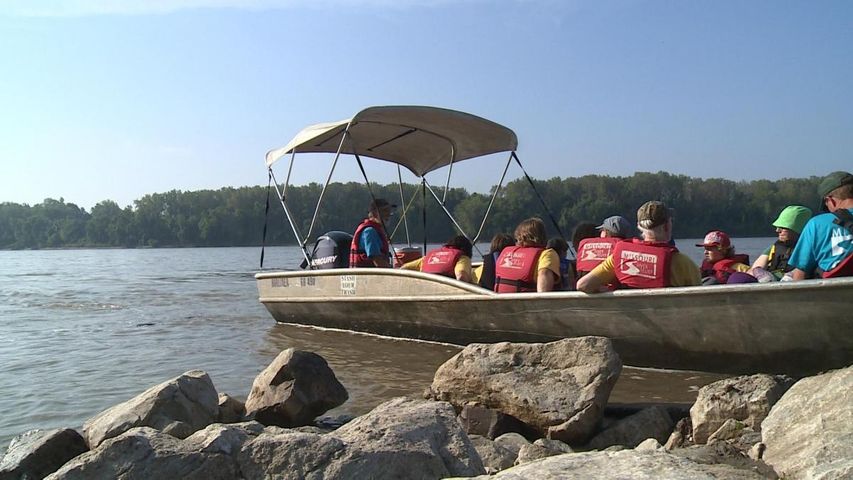 BOONVILLE - Over 200 volunteers boarded boats in Boonville Saturday morning to clean up the nation's longest river.

As a part of the Big Muddy Clean Sweep 2014, Saturday morning was filled with trash bags, debris, boats, boy scouts, children, grandparents and mud.  Lots of mud.  The change in the Missouri River levels have left the banks flooded in deep mud.  Along with this mud is the trash that floats down the river because of storms and flooding throughout Missouri.

Missouri River Relief Program Manager Steve Schnarr said this is the second time they have done this clean sweep in Boonville.  On Saturday, the boat ramp was covered with shovels and empty trash bags in preparation for the day ahead.  And for a good reason.

"So, we usually get anywhere from two to seven tons of trash that people will pick up in one day like this," Schnarr said.

Volunteers came out on Saturday to help carry the weight.  Especially since a clean river means a lot more than beauty to over half of Missouri's population.  Schneider said sixty percent of people in Missouri rely on the River for drinking water.  Others make regular passes by Hinkson Creek in Columbia as a part of their daily walk.  Hinkson Creek is experiencing similar issues as trash and debris are causing cleanliness issues.

But one volunteer, Todd Schneider, does not just do it to clean the river, he does it for his community.

"Community is getting lost as far as people knowing each other," Schneider said.  "It's a chance for people to get together that know each other, or get to know each other from different areas and the same area, and it brings neighborhoods together."

And the community bonding continued throughout the day.  Missouri River Releif paired with the Isle of Capri Casino to host a river festival after the clean sweep finished.  Volunteers were able to participate in educational seminars and games as well as enjoy lunch overlooking the newly cleaned river.