Big names campaign in Missouri ahead of critical Senate race 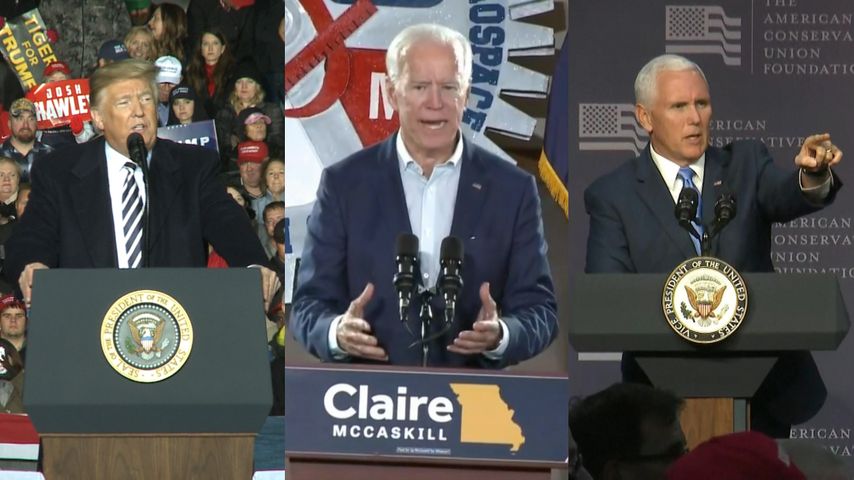 McCaskill is one of 10 Senate Democrats running for re-election in states President Donald Trump won in 2016. Hawley hopes to unseat McCaskill, who has held the seat since 2006. There are currently 51 Republicans and 49 Democrats in the Senate.

Trump will hold his third Make America Great Again Rally on Monday in Cape Girardeau. The president, who vocalized his support of Hawley as early as last November said Thursday at a rally in Columbia, Hawley is a "star."

Hawley has closely aligned himself with Trump, who carried Missouri by nearly 19 points in 2016.

McCaskill has accused Hawley of being afraid to stand up to the president.

"I think you need to decide if you want someone who is going to be a party-line person," McCaskill said. "Josh Hawley has said he disagrees with nothing the president has done. I don't know anybody I haven't disagreed with on something."

Asked after the Oct. 18 debate in St. Louis if there were any issues in which he disagreed with the president, Hawley said his test "is going to be what is good for the people of the state."

"And if it is good for the people of the state, I am gonna be for it," he said. "They voted for this president by 20 points. They support his policies, and so do I. And I am not afraid to stand up to anybody when it's in the interest of the people of Missouri."

McCaskill sees herself as someone who is a moderate and is willing to listen to and work with others.

"I fight for Missourians. I don't fight the president. But I do think, because I'm willing to compromise and work in the middle, I actually have gotten a lot done," she said.

But Hawley said McCaskill is a "party-line liberal."

"That's what I think Missourians demand of me: that I don't always take a party line," she said at the St. Louis debate.

"My name is Joe Biden, and I work for Claire McCaskill," he said.

He said the American political scene needs people who are authentic, tell the truth and treat others with dignity and respect.

"Claire doesn't need my help, but that's why I'm here. Because you have one of those people, one of the most unique people in the United States Senate who does all of those things, Claire McCaskill," Biden said. "She gets it. She doesn't forget."

"I've met a lot of people on the campaign trail, but I don't know that I've ever been more impressed by someone with the character and the intellect and the vision of Josh Hawley," Pence said.

The final blitz is a good indicator of how close this race is, said Peverill Squire, an MU political science professor.

"Both parties think that they need to mobilize as many of their voters as possible because this is one of those contests where it appears, right now, that every vote will really count," he said.

Not as many big names have come to Missouri to campaign for McCaskill because she is better-known, Squire said.

"She doesn't have to rely on others to come in and speak on her behalf, Squire said. "She's held office here for a very long time, so she is probably grateful to get some support but she doesn't need it to the extent that Hawley might."

He said Hawley is still trying to establish his image, since he has only been in elected office since he became attorney general in 2017.

"There's a lot of just really, really close races, and none of them are any closer than here in Missouri," said the editor, Charlie Cook.

Squire said he believes McCaskill has an edge.

"I suspect most of the surveys are probably underestimating the Democratic vote by a couple of points just because it's an odd year and we're going to have turnout unlike what we've seen in the last couple of midterm elections," Squire said.

Cook put his money on Hawley.

"I guess if you put a gun at my head, I'd probably put a small finger on the scale for Hawley, but it's going to be a close race and could go either way," he said.

As of Sunday afternoon, the polling average from Real Clear Politics showed the race tied at 46 percentage points.