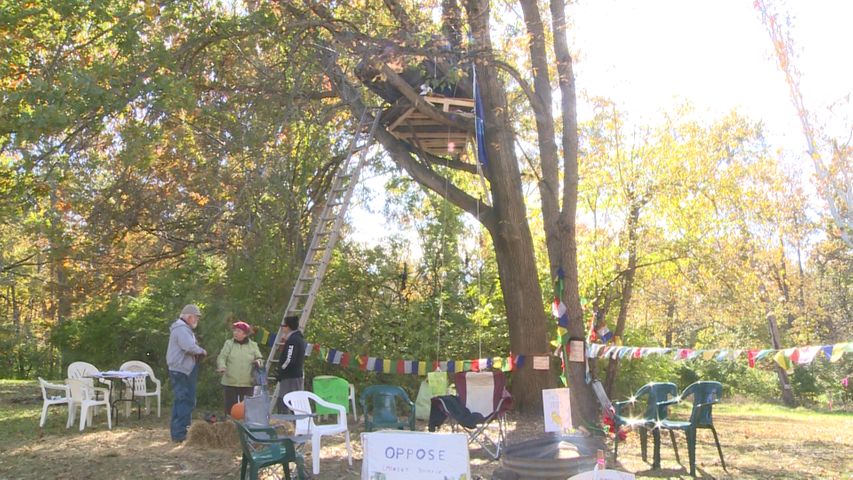 COLUMBIA - After a yearslong battle between local activists and the city that featured environmentalist Sutu Forté climbing a tree and refusing to come down for over a week, the Shepard to Rollins connector of the Hinkson Creek Trail formally opens Wednesday for bicycles, walkers and runners.

The 10-foot wide concrete trail crosses the Hinkson Creek and provides non-motorized transportation access from Bluffdale Drive to MU. The trail will make up part of a 30-mile trail loop around Columbia and allow residents north of Interstate 70 access to the MKT Nature and Fitness Trail, the MU campus and downtown Columbia.

The battle for the trail connector goes back over a decade. Forté and her neighbors said the city first tried to put a trail in the area in the 1990s, but residents opposed it.

Neighbors of the trail, which connects the east end of Rollins Street to the Bluffdale cul-de-sac, weren’t happy the city was planning to remove several trees and destroy their wilderness sanctuary to build this trail. To build the trail, the city said it needed to cut down over 40 native mature trees.

The issue of the trail versus the trees went back and forth in Columbia City Council meetings for several years. After the PedNet Coalition, a nonprofit that advocates for more bikeable and walkable infrastructure, began lobbying for it, the city became more serious about completing the project.

The council voted in February 2018 to move forward. After filing an eminent domain lawsuit, the city won the right to build the trail through the property.

In October 2019, the city was ready to begin construction of the trail and sent out a letter to neighbors informing them.

It’s Our Wild Nature, still not content to let the city destroy their nature reserve, organized a petition and acquired 1,100 signatures opposing the trail. They presented the petition at City Council meetings and made public comments against the trail.

They asked the council to make the trail a ballot measure in the April municipal election, leaving the question to voters to decide.

When it became clear the city would move forward, Forté, one of the organization’s co-founders, decided to climb up a tree on Oct. 28 and said she’d refuse to leave until the city changed its plan.

“Compromise is not applicable,” she told the Missourian at the time. “How could there be a compromise if this is to remain the Columbia Wilderness Sanctuary?”

Her protest drew a group of supporters and media coverage. The area around the tree was blocked by orange plastic netting, and supporters gave her food and set up generators to power her electric blanket.

“The council has voted, taxpayers have expended dollars for this, and we have to move this project forward,” Mayor Brian Treece said on David Lile’s “Columbia Morning” KRFU/1400AM radio show at the time.

On Nov. 4, Maj. Tom Reddin of the Boone County Sheriff’s Department climbed into the tree and explained to Forté the steps the city was taking. Local officials had given Forté until Nov. 8 to leave the tree.

With approval of Circuit Court Judge Jeff Harris, authorities removed Forté from the tree on Nov. 5 — eight cold, and at times snowy, days after she had climbed up.

Supporters in the crowd sang “This Little Light of Mine,” as she was brought down from the tree by a firetruck’s hydraulic bucket, handcuffed and put into a Columbia police car. She was released from jail a short time later.

In a news release announcing the formal opening of the trail, the city said staff from Columbia Parks and Recreation Department will start implementation of a tree reforestation and replanting plan.

City staff will work with neighbors and interested parties to replant and restore trees and native plantings along the trail, according to the release.