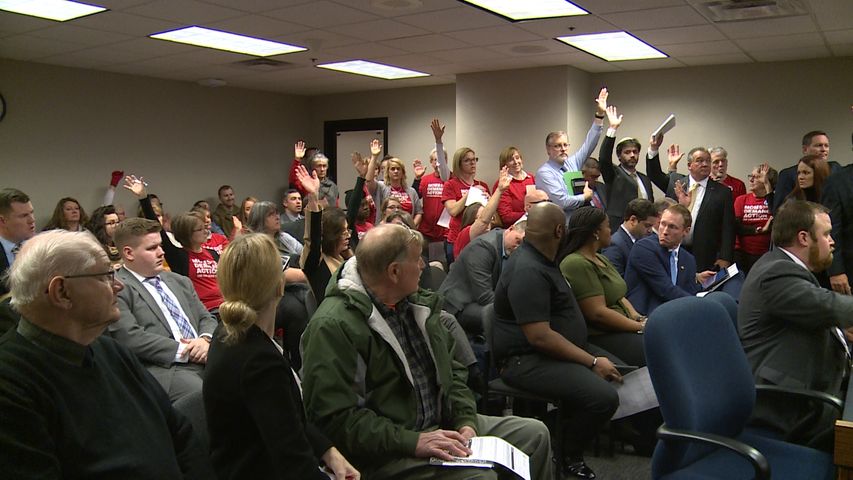 JEFFERSON CITY – Missouri’s public universities would be required to allow anyone with a concealed carry permit to have firearms on campus under a bill debated by a House committee Wednesday night.

Supporters said the bill would allow people to protect themselves, while critics fear it would allow for “guns everywhere.”

“It is allowing private property owners to make that decision for themselves. I don’t believe that the government should be telling one way or the other," said Rep. Jered Taylor, the bill's sponsor.

Taylor said the bill also prevents municipalities from restricting people from carrying concealed firearms except for places like police stations, courtrooms and jails.

Critics said places like day cares, bars and casinos should be gun-free.

Jean Knapp, a volunteer with the Springfield chapter of Moms Demand Action for Gun Sense in America, urged lawmakers to oppose the bill.

"Allowing more people to carry guns will not make us safer. It also will not save lives,” she said.

Taylor said the bill would allow people to protect themselves in an active shooter situation.

“If we give individuals the ability to go into those locations where they’re currently now allowed. They possible could stop that situation immediately,” Taylor, R-Republic, said.

Lincoln University Police Chief Gary Hill said he worries about student safety if an active shooter were to come to campus and some students were armed.

“The last thing we want to see on that is for us to kill someone on accident, someone who was trying to protect themselves,” he said.

Paul Wagner, executive director of the Council on Public Higher Education, said decisions on policies about carrying firearms on campus should be left to universities’ boards.

“Frankly, they don’t care what faculty think. They don’t really even care what the presidents think. They listen to their law enforcement professionals,” he said.

Scott Jones, a lobbyist for the National Rifle Association, said the bill would “repeal arbitrary gun-free zones that do nothing to hinder criminals while leaving law-abiding citizens defenseless.”

Taylor’s bill has failed in years past. He said the proposal has more traction this year.

“I’m hopeful this year is the year that we’re going to get it across the finish line,” Taylor said.