Bird scooters become a problem for the disabled community 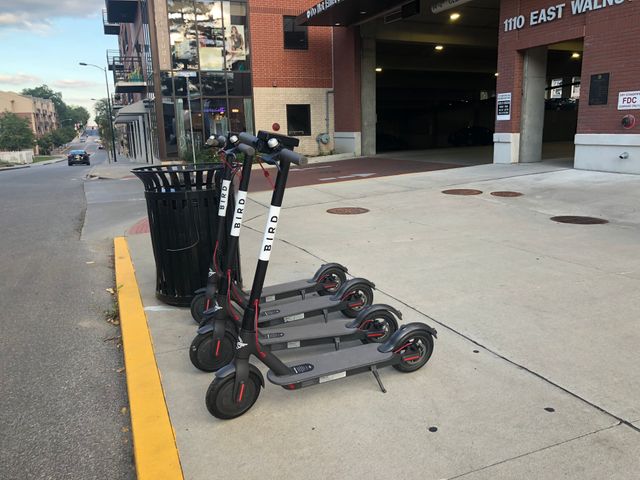 COLUMBIA - Bird scooters have nested into Columbia and onto the sidewalks, obstructing the path for people who rely on them to get around town.

Bird, a scooter rental company, came to the city a few weeks ago, and now, they're everywhere. To take one for a ride, all you have to do is download the app and pay $1.

Though many in the community like the scooters, some in the disabled community do not. The Bird scooters do not have a designated area to park them, so some users leave them scattered on the sidewalks. This is frustrating people like Jamie Leonard who use their wheelchairs on the sidewalks.

"Kids park them whenever, wherever they want," Leonard said. "They're not worried about me or how I'll get around it."

Christina Ingoglia often goes downtown with her daughter who uses a walker. She said her daughter relies on sidewalks to get around safely, and she sees the scooters as a potential problem for her.

"I wish people would be more conscious of the fact that sidewalks are kind of a lifeline of access for people because many disabled people don't have other options," Ingoglia said.

Ingoglia said Bird should have worked with the city prior to bring the scooters here to work out issues like this.

"I think when a company is trying to make money off of a service like this, they have a responsibility to educate people and to maybe even say, 'Hey, you need to know that when you put this away, it shouldn't be blocking the sidewalk, or here's some great places to put it.'" Ingoglia said.

The City uses MoDOT's Americans with Disabilities checklist when designing and constructing sidewalks. Part of the ADA checklist is to require an "unobstructed clear width of a pedestrian access route" at a minimum of four feet. When Bird scooters obstruct this path, it is breaking one of the city's ordinances.

Bird is still operating without a business license in Columbia. Adam Kruse, ADA Coordinator for Columbia's Disabilities Commission, said the city is currently negotiating terms with Bird, and they're going to discuss a minimum clearance rule on sidewalks. He said they will make sure the word gets out to users and that there will be consequences if it doesn't.

"The nature of this technology is people are using scooters then parking them on the sidewalk," Kruse said. "Right now, we're just depending on these users to park in a responsible way that won't hurt the people who depend on the sidewalk."

Cheryl Price has received multiple email complaints about the scooters. She is the former chair of the Public Transit Advisory Commission, and she also served as former chair of the Disabilities Commission. Price now uses a wheelchair, and she said it has caused her to pay close attention to safety problems like this in the community.

"I think there's a definite lack of communication, and the city and university need to sit down with the Bird owners to explain that there are some ordinances that they need to live by in this city," Price said. "If they don't, they could seriously affect people like us."

Columbia's Disabilities Commission will speak about Bird scooters' effect on sidewalks at its meeting Thursday. The meeting is open to the public.