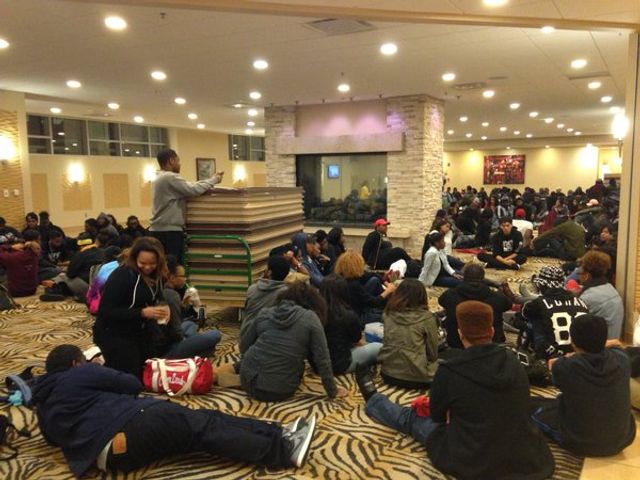 COLUMBIA - Members of the black campus community joined together Wednesday night to discuss the healing process following the recent events on the MU campus.

Students and out-of-town supporters marched and chanted from the Black Culture Center to the MU Student Center.

One participant said it was all about community building.

"I think students were able to connect with others," Reuben Faloughi said. "I think it can be, being at a predominantly white institution, it can be isolating some times. You can feel like you're the only one or nobody else understands your experience, but here I think you can come and share those lived experiences, no matter what color you are and build from there."

After marching to the student center, the students formed discussion groups to talk about the atmosphere on campus after threats on the social media app Yik Yak.

"It was traumatizing, particularly for the black community that was directly threatened and so we wanted to create spaces where people could process those feelings and thoughts because there's not many spaces on campus to do that," Faloughi said.

He said an agreement was made with the university to keep the basement of the Student Center open for out-of-town supporters and others to stay the night.

Concern student 1950 is in the student center tonight @KOMUnews pic.twitter.com/kOo8omcH8A

Students are chanting "I believe that we will win" in the basement of the student center @KOMUnews pic.twitter.com/saZ0QwwUFD

Student have broken up into healing circles to discuss their thoughts on the last few days @KOMUnews pic.twitter.com/FsWJxcnrUk

Some members of #ConcernedStudent1950 will be sleeping in the basement of the Student Center @KOMUnews pic.twitter.com/zpitQhhLf0

Some reasons include to feel safe, no place to sleep tonight, to continue reflections on the week and other miscellaneous reasons @KOMUnews