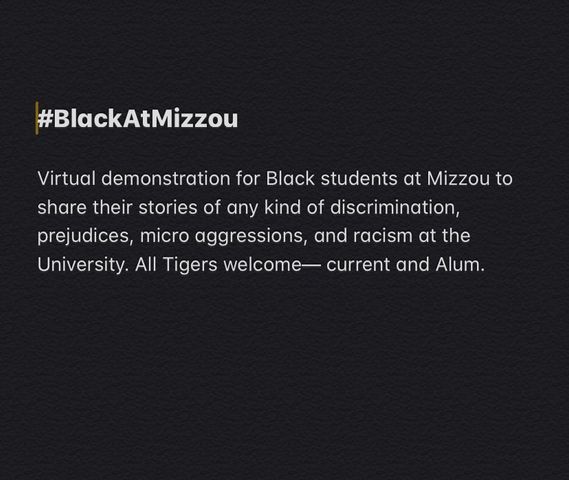 COLUMBIA – While people are marching and chanting across the world to fight against racism, University of Missouri’s Black students have been tweeting their experiences on campus using #BlackAtMizzou.

“It was supposed to be a way to bond and share black trauma, especially at Mizzou,” hashtag creator and MU senior AJ Foster said.

She said she this social media movement is another way for people to get their voices heard without leaving their homes.

“We are in the middle of a pandemic,” Foster said. “People are forgetting this. We are supposed to be in quarantine.”

She said that is what inspired her to start the online movement.

“People are on social media more than ever,” Foster said.

She said it is important to hold MU accountable.

“If you love something and you love an institution, then you have to hold them accountable,” Foster said.

MU Senior Alexis Hunter said the accountability is especially important as Black people are holding police and the government accountable.

“It’s still cool to see – ‘okay, we’re taking up space and coming together as a community at Mizzou and demanding that they also meet the needs of us in the same breath that we’re telling the country that they have to do better, as well,’” Hunter said.

MU Senior Zion Ford said he shared his experiences using #BlackAtMizzou on Twitter, and that he is happy it started a conversation.

“I’m already seeing other communities within Mizzou are listening and looking at that hashtag to open their eyes to the different experiences they might not have experienced,” he said.

Hunter said she wants to see more Black faculty and staff on campus.

“If we choose to stand up for ourselves, we’re having to do that in white spaces,” she said.

Hunter said she was disappointed but not surprised by MU’s statement on Twitter Thursday morning. The statement reads:

“We have been listening to the heartbreaking stories of discrimination and racism from our students online and in person about the pain that is being felt by our black students, faculty, staff, and alumni, and our entire Tiger family after the horrific death of George Floyd.

Reflecting on these experiences, we know that we have much work to do to create greater diversity and inclusion. We are planning community conversations to discuss Mizzou’s plans for further progress toward true inclusion.”

Foster said the statement was not enough.

“To see their statement today… you still haven’t done anything,” she said. “That does nothing and helps no one.”

Ford said he wants to see more action from the university.

“You can only say so much,” he said. “What are you going to do to back that up?”

Foster said the movement is not about attacking a single person or group of people.

“We’re attacking the policies you have in place that are anti-black – and that have remained anti-black,” she said.

She said #BlackAtMizzou started a conversation, but she said conversation is only a means to getting to the solution.

"We have vowed to do more as we have met with numerous black students, staff and faculty who have described the immense toll that systemic discrimination and racism has taken on their confidence in justice, on their mental health and on their hope that true change will ever happen," he said.

Choi said he recognizes the university has more work to do to achieve inclusion, diversity and equity.

"I can tell you my heart has been rocked by this experience as have many others, and those who shared these posts should know their experiences are valued and have not been ignored," he said.

This story has been updated to include UM system president and Interim MU Chancellor Mun Choi's statements.