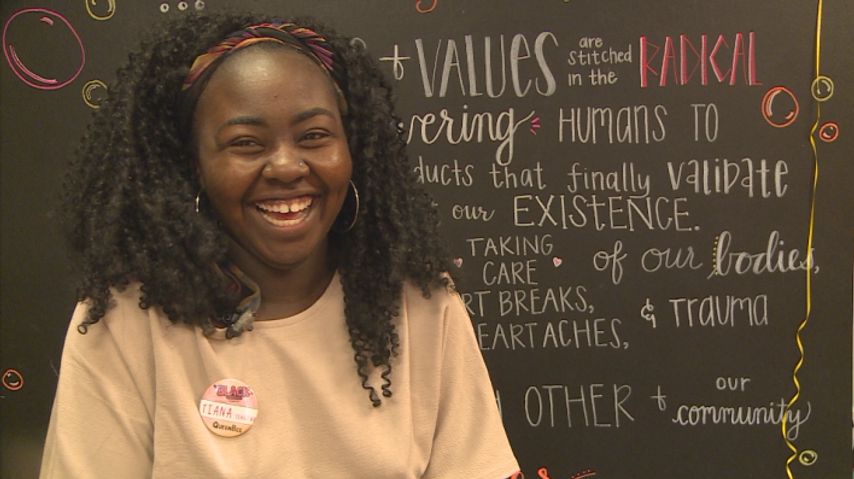 COLUMBIA - The scent creates an easy to follow trail into a 325-square-foot room in the University of Missouri's student center. Lavender, peppermint, oatmeal and more all waft through the room.  Shelves are filled with a pastel-colored bath and body products. The "we believe in taking care of our bodies" greet customers as they walk in.

Black Honey Bee Cosmetics, a black-owned business, is geared for women of color.

“This is the first time I’ve seen a store like this. Made for women of color made by a woman of color, and it’s just really great,” said Dynasty Avila, who works at the store to help her friend Tiana Glass, the owner.

“Just to have this on paper and actually have it in the store is just amazing," she said.

Glass began to jot down her business ideas in 2016, but the shop's inspiration came a couple years before that.

"I don’t think it would’ve existed had Ferguson had not happened," she said.

Protests and riots broke out in Ferguson, Missouri, after Darren Wilson, a white police officer, fatally shot Michael Brown, a black man, in 2014. Glass is a Ferguson native.

She said the business was designed, in part, with the activists in mind.

"Those were in the streets protesting and giving their all. I wanted them to also have these products of self care, which is the images of them as well,” she said.

Glass said another mission is to empower women of color to feel beautiful, loved, validated and seen.

“Everything is named after a person of color, black people, women of color, so it’s really created in the eyes of blackness," she said. "So that’s what sets me apart from other beauty brands.

Glass said, at its core, Black Honey Bee Cosmetics is all about diversity.

"Having black and brown bodies, having those who are queer, having those who live within the non-gender binary, those who have abilities and disabilities, and not fall into your traditional beauty standard norms, that’s what sets me apart. I’m really true to that mission.”

That mission was apparent to Avila.

Glass said the shop was also built on hard work.

“I made over 400 bath bombs. Staying up till 3 a.m. in the morning, 4 a.m. in the morning, cranking these out with one person next to me doing it," she said. "There were times where I just wanted to quit. I just threw my hands up "I can't do this anymore," but because I had so many encouraging people around me, I was able to do this."

Her mother, Joyce Glass, was part of that support system.

Joyce Glass said she hopes her daughter will keep the business going because of what it represents.

Tiana Glass said, “This is not the end all be all. It’s going to go up from here. I want to see this flourish.”