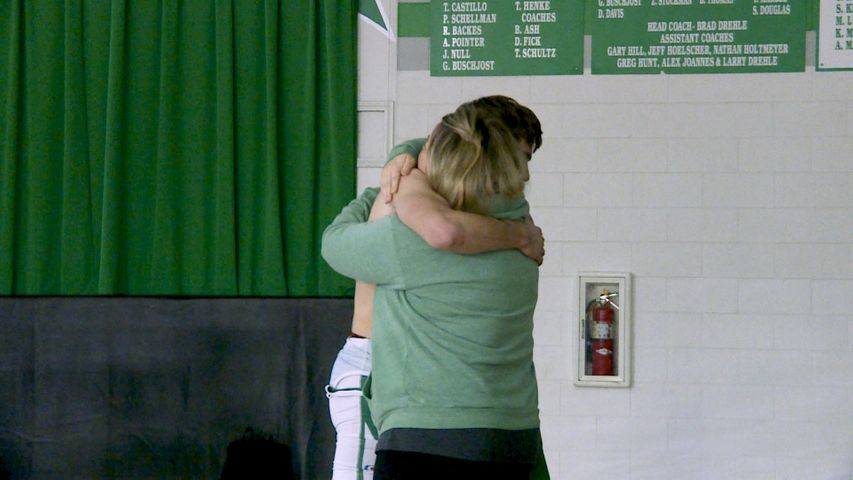 WARDSVILLE - Blair Oaks wrestling sent seven qualifiers to the state championship this weekend in Columbia. Among them is senior Caleb Meeks, who stepped out on the mat for the last time in his high school career on Friday.

Caleb's dad, Matt, helped his son prepare for this weekend and said he didn't really think about his son's final match.

"I'm sure it will set in Sunday," Matt Meeks said. "It'll probably be a rough day for me."

Caleb won his first match at state on Thursday morning and advanced to the next round.

However, he went 0-2 on Friday and stepped off the mat for a final time.

Caleb has had a distinguished career at Blair Oaks following some bumps in the road that would have derailed most teenagers from success.

His first hurdle was in 2014 when a physical to clear Caleb to play football revealed he had a osteosarcoma in his right leg.

His parents took him to Children's Mercy hospital and tests came back with good news.

"All the tests came back negative...it was benign," Matt Meeks said. "And so, thankfully, prayers were answered there and we didn't have cancer."

Caleb had surgery to remove the tumor, but curved bones left him in pain. A second surgery would be needed to keep the pain from spreading into other parts of his leg.

However, a surgery would require him to sit out from wrestling for a season.

"I would have to miss a whole wrestling season if I was to get that fixed," Caleb Meeks said. "So I figured that I would go ahead and just tough it out until after high school."

Caleb wrestled his freshman year at Blair Oaks and got the attention of his coaches. But a dislocated shoulder during his sophomore season put him out of commission.

At that point, Caleb decided to go ahead and go back under the knife to stop the pain from spreading. Three sutures, six screws and a titanium plate later, Caleb was ready to recover to get back on the wrestling mat.

His first months of recovery were spent in a wheel chair. Caleb was at a crossroads of either folding to his hardships or finding new ways to be successful.

He chose the latter.

"We were going to use this as an opportunity to either be better or bitter, right?" Caleb's mom, Brandy Meeks, said. "And Caleb chose better."

However, his goal changed going into his junior year to win 100 matches.

"I was very skeptical," Blair Oaks wrestling head coach Mike DeMilia said. "And he just, worked his way, willed his way to wrestling and, you know, to winning matches."

On Feb. 10, Caleb reached his goal of 100 wins in front of his parents and a small crowd at Blair Oaks High School.

"[I'm] incredibly proud of everything he's overcome," Brandy Meeks said. "And it just makes me so excited to see not just what he's done in the past, but what he's going to do in the future."

His coach says one thing is for sure - he is happy Caleb was able to come back to the mat as a competitor.

"The respect that he has in the room is second to none," DeMilia said. "It would not be the same room without him."