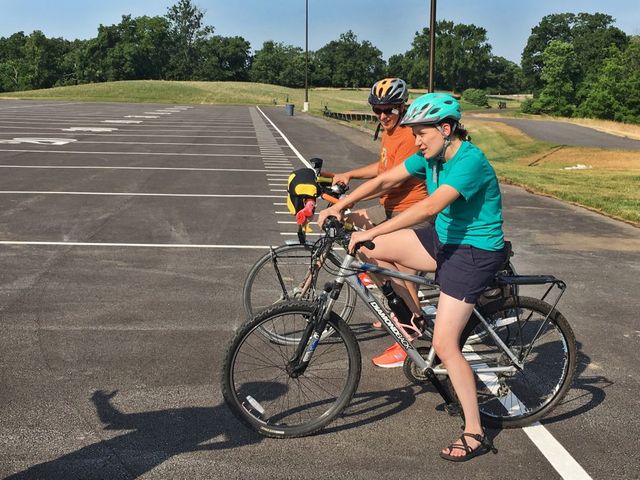 Gretchen Maune looks ahead with her teacher, Rachel Ruhlen, before taking off on her bicycle. Maune is learning to ride for the first time as an adult. 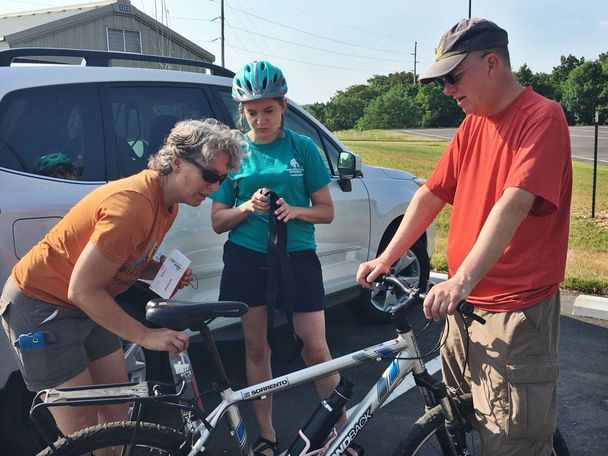 Teacher Rachel Ruhlen looks at Gretchen Maune's bike seat as Gretchen feels an inner tube to help further understand her bike. Teacher Joe Silsby looks on as he holds up Gretchen's bike. All three are on the PedNet Coalition. 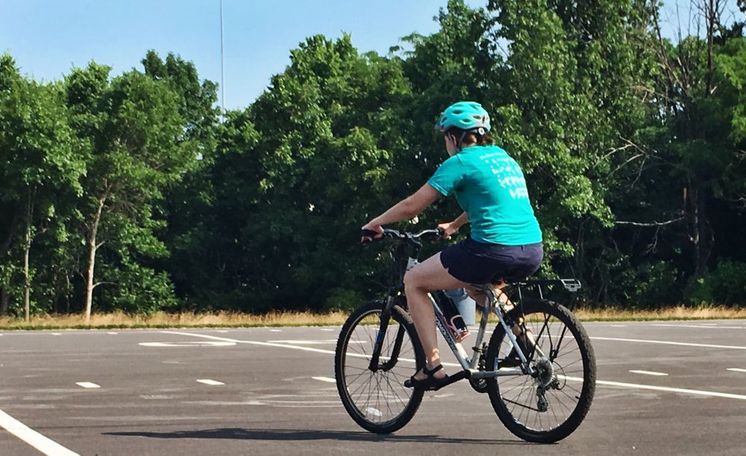 Gretchen Maune rides her bike on the Marching Mizzou practice field near the Hearnes Center in Columbia. Maune is learning to ride in spite of a condition which caused her to lose her sight in 2006.

COLUMBIA — Gretchen Maune said losing her sight has made her "more fearless." She wanted to stretch herself by learning to ride a bike.

"It felt amazing," Maune said. "Everyone’s so friendly when you’re on a bike. You’re just moving along, you’re getting exercise, and you’re going somewhere, and the wind feels great, and it was just really cool, and learning a new skill."

She remembers when doctors told her.

"When they finally diagnosed me and told me there was no treatment and no cure, and all that stuff, it was completely permanent, it was really hard," she said. "I got really down and thought for a good year and a half-ish that I was thinking, 'I’m not going to be able to do stuff anymore.'"

Maune first attempted to learn how to ride a bike when she was 7 years old.

"It didn’t go well, and I was just like, 'I learned other things quick, I am not learning this quick, I’m gonna move on, do something else'," Maune said. "I remember that my bike was pink and that I had tassels on the sides, streamer things that came out of the handles. I had a basket with little bows on it, and I thought it was really pretty and I wanted to be able to ride it."

Maune also said this time will be different.

"I’ve been through a lot now," Maune said. "Since then, I have experienced a lot in life. It’s just like, 'Yeah, I could do that.' I’ve done all of these different things, and why not? What’s the worst that can happen?"

Maune tried to ride on a tandem with a friend about five years ago, but she said that did not go well, either.

"We went about five feet and crashed, and he got a really bad cut on his head. I didn’t get on again," she said.

She decided to give it one more chance when her PedNet Coalition colleague, Rachel Ruhlen, offered to teach her on a tandem bicycle.

"We just went up and down my street, which is a little dead end street, over and over again," Maune said. "Then she was like, 'Okay, do you want to go over to Stephens Park?' and then I was like, 'Oh god, maybe we just try going about ten more feet first.'

She said the two then ventured over to the parking lot by Wabash bus station and then a little further.

One of her goals of learning to ride is to combat the stereotypes that she and other blind people face.

"I'm guessing people would be surprised a blind person could ride a bike," Maune said.

She said people are also surprised to learn she can use a computer, or walk down the sidewalk and go to a coffee shop by herself.

"We can do everything that someone who can see can do, we just do it a little bit differently," she said.

How people teach someone to ride a bike has changed since when Maune was younger.

Early in her training this time around, she had to balance on a bike with no pedals, and no training wheels.

Joe Silsby, who teaches Maune with Ruhlen, said this is exactly how he teaches other students.

Maune then rode on a bicycle uniquely designed for blind people, while Ruhlen rides next to her as a guide. The special bike has two wheels in the front and one wheel in the back, in order to help her keep balance. There are also brakes and a bell like any typical bicycle. By her third lesson, she was riding a typical bicycle.

Ruhlen said Maune is not held back by her disability.

"She's picking up bicycling a lot faster than other students,"  Ruhlen said.

Silsby said, "Gretchen is no different from other adults I have taught to ride. She is learning like any other student I have had."

Silsby said he has had to approach his teaching differently due to Gretchen's condition.

"I had to rethink what is different for me as an instructor, not for her as a learner," he said.

"I couldn't demonstrate by having her view me or view obstacles," Silsby said. "I had to think up obstacles that she could 'see' by manipulating, by holding."

To demonstrate a pothole, Silsby had Maune hold the top of a cup and said, "If your wheels hit that, it can take you down." To show the effects of uneven pavement, Silsby used a couple of boards.

Learning to ride a bicycle is an activity she can do friends and she hopes one day to "be able to drink beer and ride my bike at Bikes and Brews."

"I want to be able to participate in this world and have fun," she said.

Maune also likes the idea of getting around faster.

"It feels so great, and you can go so much farther faster than if you’re just walking, because I walk everywhere," she said. "Riding a bike, I don't know, it’s really awesome."