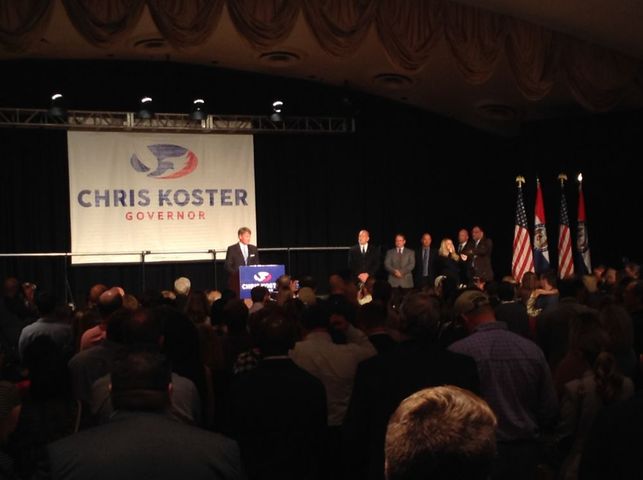 ST. LOUIS — Early in the night at gubernatorial candidate Chris Koster’s watch party, hopes were high for Missouri to elect another Democratic governor. As votes rolled in, supporters filed out of the ballroom of the Chase Park Plaza Hotel before Koster delivered a concession speech Tuesday night.

“I wrote two speeches and tonight you’re only going to hear one,” Koster said just after 10:30 p.m.

Koster followed his concession by thanking those in attendance for their “faith, support and friendship.”

As Koster wrapped up his speech and hugged his family members, those remaining in the ballroom made way for the exits, some crying.

Hundreds turned out for to watch the results roll in at Koster’s watch party, many of whom were volunteers to the campaign, according to Missouri Democratic Party spokeswoman Kristin Sosanie.

Various Democratic political figures from around the state and St. Louis spoke on behalf of Koster throughout the night, all thanking the supporters of the Missouri Democratic Party.

St. Louis Mayor Francis Slay was introduced as one of the state’s biggest supporters of Koster’s campaign. Prior to Koster’s speech, Slay spoke to the crowd, urging them to keep hope and that there were “still a lot of votes to be counted.”

At the time the race was called and Koster accepted defeat, Greitens held the lead for the governor’s seat by almost 15 percent across the state.