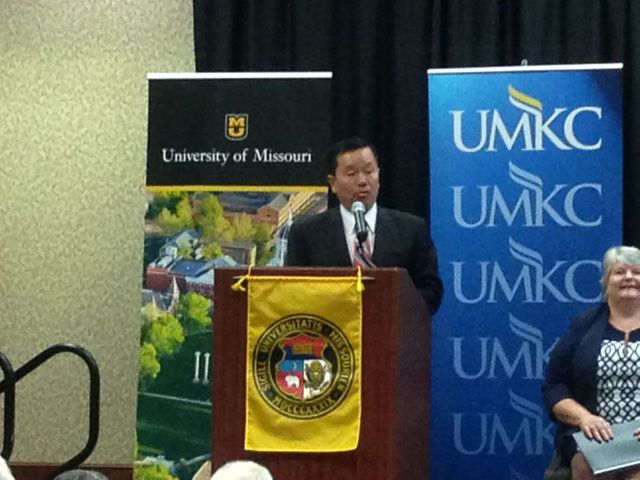 JEFFERSON CITY – Almost one year after former UM System President Tim Wolfe resigned due racial tension on MU's campus, the University of Missouri Board of Curators announced Wednesday that Dr. Mun Y. Choi will be the 24th UM System President.

“It is fitting that we begin a new era for the University of Missouri System today in our state’s capital city, as Dr. Choi is just the individual to lead the university system to new heights in achieving our statewide mission of serving all 114 of the state’s counties,” Board of Curators Chair Pam Henrickson said.

Choi has spent 24 years in higher education; a good amount of that time was spent at the University of Connecticut where he started as the Dean of the School of Engineering and then moved up to being the provost and executive vice president for academic affairs.

Susan Herbst, the president of the University of Connecticut, said in a news release, “He has been invaluable to me and to UConn as a whole. I cannot thank him enough for his service to the university and for his friendship.”

During Choi’s speech at the Capital Plaza Hotel he said, “As president, I’ll work with the curators, the chancellors and the senior leadership team and all of the stakeholders to shape the compelling reasons why talented and diverse students will select UM for their education; why world class faculty members will begin and continue their careers here at UM; and for government, donors and corporations to continue to make investment in this great system.”

Choi said it is very important to him to create an environment that is welcoming, inclusive, collegial and respectful.

“During my career in academia, I’ve always developed new programs that have provided opportunities, pipeline development for underrepresented minority students, bridge program for women students in engineering and serving as the principal investigator for a number of programs that have benefited communities, like the research experience for teachers, to train teachers from inner cities in doing research and becoming more effective mentors.”

When asked about the racial incidents and protests on campus he said, “The incidents that have occurred at MU are not unique to the campus or Missouri.”

When asked about the incident involving former professor Melissa Click, he said there needs to be a balance between free speech and academic freedom, but also appropriate ways to communicate with each other respectfully.

“When it comes to creating an inclusive environment, it’s not the responsibility of just one individual. It’s our collective responsibility and we do it because that is what’s important at a university,” Choi said.

In response to the ongoing unrest among graduate workers, Choi said graduate students are the lifeblood of a research university and are very important to him.

He said he could not make a definitive answer on the issue of a graduate student union and that he needs more time to research.

In a news release, the Coalition of Graduate Workers said, “We hope that in his new role, Dr. Choi will recognize the regretfully costly and wasteful nature of the University’s decision to force legal action, and will voluntarily recognize the union. It is clear to us and many campus constituencies that long-term stability and institutional health can only be achieved by good faith bargaining between graduate employees and the University’s leadership.”

The coalition said it looks forward to working with Choi to settle the situation.

Choi said it is very important to him to listen and meet with as many students, faculty and stakeholders as possible.

He will be visiting all four campuses in the coming months, before he officially starts his time as system president on March 1, 2017.