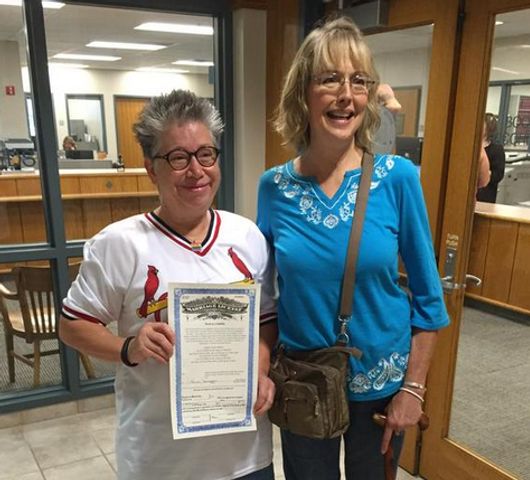 Following the U.S. Supreme Court's ruling to legalize same-sex marriage nationwide, Perry and Perrin showed up at the Boone County Recorder of Deeds office to apply for a marriage license. After the couple payed a $51 fee and signed their license, the pair walked hand-in-hand to the Boone County Courthouse for an impromptu ceremony.

In preparation for the decision, Boone County had two judges on stand-by for the day on Friday, so any same-sex couple could have a ceremony right away.

Perry and Perrin were the second couple to be issued a same-sex marriage license by Boone County.

"Oh, it feels great," Perrin said. "I mean, how exciting is this after 17 years of being together we can finally legally be recognized as a married couple, no longer a second class citizen. We're equal to everyone else in this great land."

"It's an incredible...didn't think we'd see it in our lifetime..its a monumental day," Perry said.

The first couple to receive a same-sex marriage license, Laura Ellen Zinszer and Bettie Johnson, applied over a year ago, according to Reorder of Deeds Nora Dietzel. She said Boone County was prepared for this transition.

"We had those changes in our software in place already," Dietzel said. "Small things like removing the bride and groom designation from the application, and a gender designation that we added to the application so that we could seamlessly issue a same-sex marriage license just as we would any other couple."

The Missouri Recorders Association released a statement Friday following the Supreme Court announcement. The release states the ruling must go into effect within 25 days in each county. However, any county can begin issuing same-sex marriage licenses immediately, at their discretion.