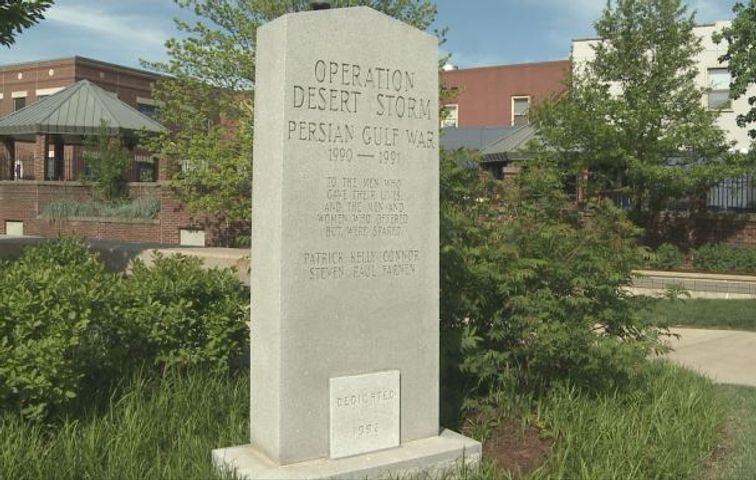 COLUMBIA - The Boone County Commission is considering relocating the Desert Storm memorial that is currently at the Boone County Courthouse. The monument caused a public uproar when it was covered last summer because of a religious symbol, a Jesus fish.

The ichthus was covered last summer with a "Dedicated 1992" plaque in response to an inquiry about the symbol from Washington, D.C.-based Americans United for the Separation of Church and State. Commissioners decided to cover the ichthus to avoid possible litigation over church-state separation issues.

The Columbia Cemetery Association has agreed to display an Operation Desert Storm memorial, along with the ichthus, or "Jesus fish" symbol, if the Boone County Commission decides to move the memorial.

County Counselor C.J. Dykhouse sent a letter on May 7 to the parents of two soldiers whose names are listed on the monument that was built in 1992. Copies of the letter were sent to William and Marsha Connor of Marcellus, N.Y., parents of Patrick Connor, and Hugh and Gladys Farnen of Centralia, parents of Steven Farnen.

The letter explained the Columbia Cemetery Association has agreed to "take custody of and permanently display" the existing memorial on its property east of Grant School between Garth and Providence if the county commission decides to move the memorial.

The commission said it would allow the memorial with the uncovered ichthus to be displayed at that private location.

Commander of the Missouri Veterans of Foreign Wars Don Briggs said it's not right for the county to move the memorial.

"It should stay right where it's at," Briggs said.

He said it's great that someone will give the memorial a home.

"I think that it's a wonderful thing that there's someone that will actually stand up and let it be put somewhere. But I think it's preposterous for our city government to move it. These guys died for their country," Briggs said.

The commission has not made a decision yet. It plans to wait to hear from the families.

Community debates covering up parts of a war hero's memorial