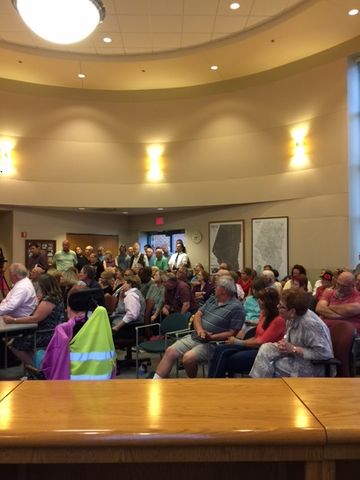 COLUMBIA - On Tuesday, the Boone County Commission held a public hearing on the possibility of changing its monument policy. It stems from controversy surrounding a monument that used to have a religious symbol engraved on it.

The controversy started after the symbol was covered up last summer. In November 2014, the Boone County Commission voted to cover up a Christian religious symbol on a Desert Storm Memorial for two veterans.

The ichthus or so-called "Jesus fish" was placed on the monument in front the Boone County Courthouse Plaza in 1992.

One Boone County commissioner said, "This is a hearing. This is not a debate. This is not a question and answer. This is only a public hearing for the opinions to be recorded for public records."

The residents of Boone County were the only ones to speak on this matter.

"Why is it different to have an ichthus on our memorial when Arlington Cemetery can have it?" a veteran said.

Colonel Jim Coy said, "The men are being forgotten."

During the hearing, the residents had three minutes to speak on their opinions, and the Boone County commissioners listened to their opinions without any input. The controversy wasn't only over the cover up of the symbol but the possible relocation of the entire monument itself.

A resident said, "Moving the monument would be an erosion of the freedom of religion."

One resident spoke in opposition and said, "I don't want it [symbol] on a government monument. I would want the symbol to stay where it is and move the whole monument to a non-government place."

There is no indication of further talk about the monument policy.

[Editor's note: This story has been updated to correct style.]