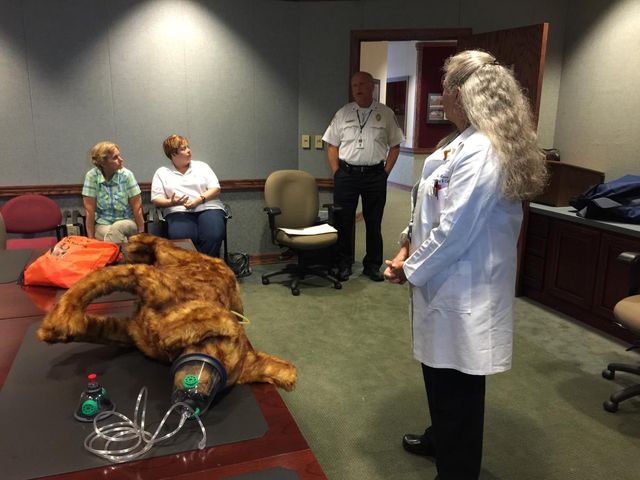 The program is part of the MVMA Animal Welfare Committee's pilot project in Missouri.

According to Dr. Chuck Massengill, the volunteer statewide coordinator for the Missouri Volunteer Veterinary Corp., presented the kits as part of a pilot program.

"Our hope is that we will be able to eventually have an oxygen mask kit on every fire engine in Missouri," Massengill said.

Each kit comes with three masks of different sizes, which can be used on dogs, cats, ferrets, guinea pigs, birds and other pets.

Before this program, many of the response teams had to use human oxygen masks on pets.

Massengill said, while Boone County already has two pet oxygen masks, the new masks will be located on the first response fire engines instead of with the emergency medical group.

"We'd like for this to be on the first vehicle on the scene because that's when the strongest likelihood of trying to do some good for an animal that has smoke inhalation or toxic fumes," Massengill said.

Cities like St. Louis and Kansas City were also considered for the pilot program but the MVMA ultimately decided on Boone County because of the lasting relationship with the Fire District and the University of Missouri's veterinary school.

Massengill said fulfilling MVMA's goal of having a pet oxygen mask on every fire engine in the state would take time and interest from communities.

Masengill said it "depends on local interest and relationship between the veterinary practitioners and emergency management."