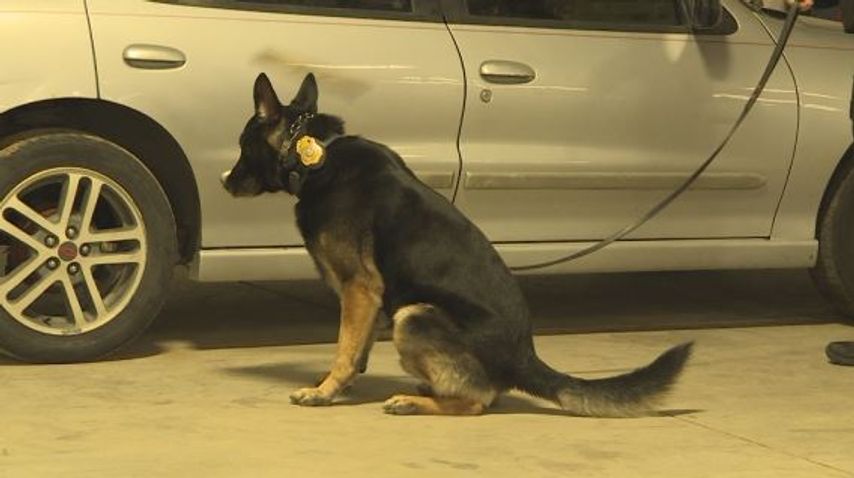 COLUMBIA - There's a new member of the Boone County Fire Protection District team, and he's hitting the ground running with all four paws.

In a training demonstration Friday, Pounds and Haaf along with their K9s displayed the skills they use when working with local bomb squads during sweeps of local venues before fans and customers arrive. According to Pounds, once the dog is fully trained, the teams will continue training weekly to maintain their abilities.

Pounds said thinking of the training like a game makes discovering new odors easy for the dogs.

"Once they understand what the game is, that they're supposed to find this odor, it's fairly easy for them to go and learn a new one once they understand that," Pounds said. "And we start out slow and then you introduce a new odor . It usually takes a couple days of training."

Luke and Brass will work at a variety of venues on the University of Missouri campus such as football games, concerts, visits from politicians, or on-campus threats. Pounds says in order for the dogs to be effective in situations like these has required lots of bonding with Luke.

According to Deputy Chris Smith, the sheriff's department typically gets their dogs from a kennel in Pennsylvania who imports them from Europe. K9 Luke has a similar story.

"Luke was actually a rescue dog and Capt. Pounds came to me with the idea of training him as an explosives dog, "Smith said. "So we tested Luke the same way we test the police dogs that we get from Europe and he did fantastic in his test. And with him doing so well in hunting and tracking we started his training."

Despite the importance of Luke's work, Pounds says at his core he's similar to most dogs.

"He lives with me obviously and he's just at home like any other dog. There's a couple things that we watch. We don't necessarily let them free. We watch them a lot more. They're very hyper dogs, they're active and so you have to channel that drive to keep them from destroying you house."

"He's my buddy," Pounds continued. "I take him to work a lot; he likes that, he likes being with me. He's pretty focused on what I do, not so much what other people do. And that's pretty typical when you start working with the dog they really attach to that person they're working with."

Deputy Smith says the K9s are a necessity for the Boone County Fire Protection District, especially in current times.

"In today's age with terrorism like it is, it's very important that we have these assets available so that we can avoid any kind of catastrophe with a bomb or explosion," Smith said.

Officer Haaf agrees it would be difficult to do the work they do without the assistance of these dogs.

"It cuts down the time by probably two-thirds 'cause they can go in and get the odors instead manually opening up every cover, opening up every closet door, looking behind TV sets. The dog can go into an area and pick up every scent through the air which cuts down dramatically the time it takes to pre-check an area," Haaf said.

The fire protection district hopes to keep the K9s affective by continuing to introduce new odors to them.

"Something new comes up everyday and new drugs come up everyday. It's the same process so it's a continuing learning process," Officer Haaf said.