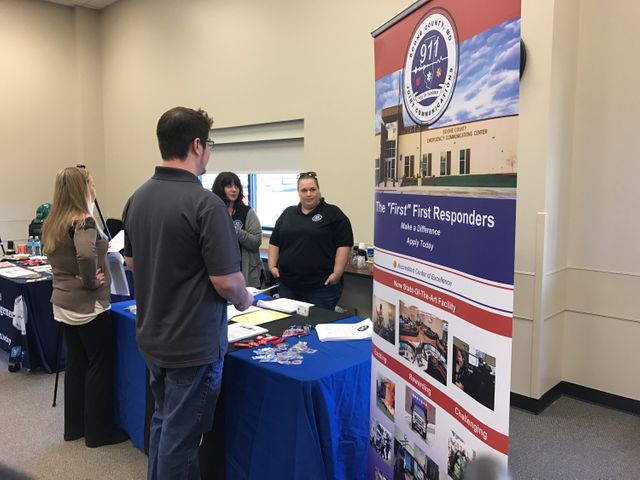 COLUMBIA – Five departments in Boone County joined forces on Tuesday to try and increase their ranks.

There are currently 30 public safety positions that need to be filled in Boone County.

To increase the number of applicants, Garrett said some departments have lowered its age restriction from 21 to 18 years old.

Joint Communications and the fire departments are looking to hire the most applicants.

Joint Communications has nine emergency telecommunicator positions to fill due to an increase in 911 calls.

Boone County Fire Department Captain Darren Day said local volunteer numbers are not as low as other counties, but the department is still looking for more.

“Overall the fire service is typically down,” Day said. “It’s hard to find people to volunteer their time. People tend to get married, have kids, get busy with going to baseball games, soccer games, all of that sort of stuff. So it’s really a matter of people having a lot of things pulling at them.”

The fire departments said it does not have a limit on the amount of volunteers they are hiring.

The Sheriff’s Department said in the past few years, it has seen a shortage of officers to work in the county jail.

“As far as detention, I think that it’s steadily going down, the amount of openings that we have. Finding good quality candidates is always a challenge,” Lieutenant Philip Smith of the Sheriff’s Department said.

Garrett said this decline might be because the job is demanding.

“Working in in a jail facility can be stressful,” Garrett said. “It’s a different environment. You’re behind the scenes; you’re working with people that are behind bars for a reason. Working long shifts too, it can become stressful.”

All positions require applicants to pass a background check and be free of drug use for at least two years.

If you missed the job fair, the county is accepting applications on its website.