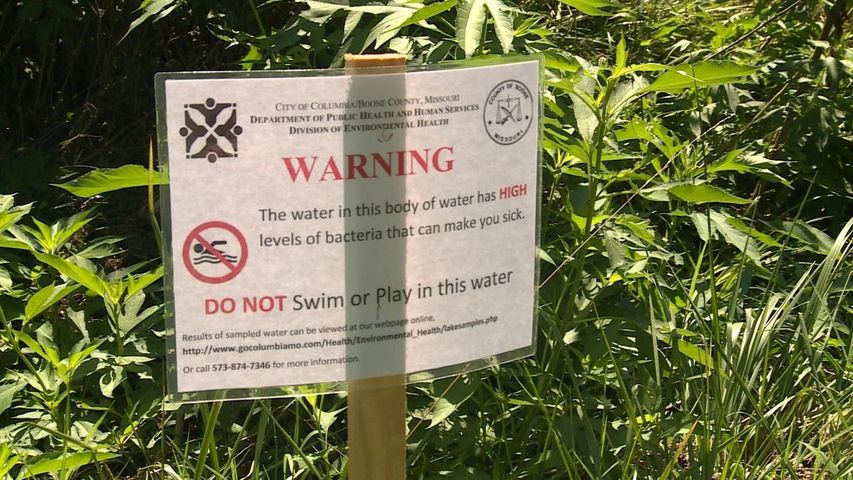 COLUMBIA - The health department started putting up signs around the Again Park Creek to warn people of a danger in the water: E. Coli.

E. Coli is a type of harmful bacteria that can grow in water that has a presence of fecal matter. The Columbia/Boone County Health Department monitors the E. Coli levels in several lakes and creeks around the county. According to the health department's records, the Again Park Creek has an E. Coli concentration of over 1400, which is ten times more than what is considered "safe."

The health department began testing the creek after it received a complaint from an Again Street resident. One resident who does not want to be named hired a private company to test the E. Coli levels in the creek earlier in the month. The resident showed KOMU 8 News the results; the company measured an E. Coli count of over 3,000, a much higher level of bacteria than the health department reported.

The creek runs through Again Park, right alongside a fitness trail and a playground.

Again Street resident Eric Gerdemann said he was surprised to discover the bacteria levels in the creek were so high, and he is concerned for the safety of the community.

"It doesn't sound good," Gerdemann said. "I walk my dogs here, I have a ten-year-old boy who likes to play in the park. I do discourage him from going into the creek, but kids don't always do what you ask them to."

Again Street resident Karie Watson said she believes the creek's bacteria is what caused her dog to become suddenly ill and die. She said she would often walk her dog along the fitness trail by the creek, and occasionally her dog would get into the water and drink.

"I researched the symptoms she had right before she died," Watson said. "Now I know why she died."

The E. Coli testing came after some Again Street residents voiced a concern about the persistent flooding of their homes due to a faulty storm drain. The drain causes the neighbors' yards to flood, and the excess water overloads the sanitary sewer pipes beneath the property and creates a sewage leak.

Watson said she thinks the sewage leak is what is causing the bacteria levels in the creek to skyrocket. She said until something is done about the storm drain, the Again Park Creek's E. Coli count will remain a health concern to the community.

"That's a pretty highly used area," Watson said.  "You got soccer games going on all the time, just think if a ball were to roll into the creek."

"It sounds like a legitimate concern of everyone who uses the park."

"Anytime we get a sanitary sewer surcharge we try and get out there as soon as we can, and we do full compliance reporting with the Department of Natural Resources," Sapp said.

Public works director John Glascock said he plans to have the sewer pipe as soon as possible.

However, one Again Street resident said she does not trust the city to fulfill its promise. She said she has scheduled a meeting with the superintended of Columbia Public Schools to talk about the danger the creek's E. Coli might pose toward the nearby West Boulevard Elementary.