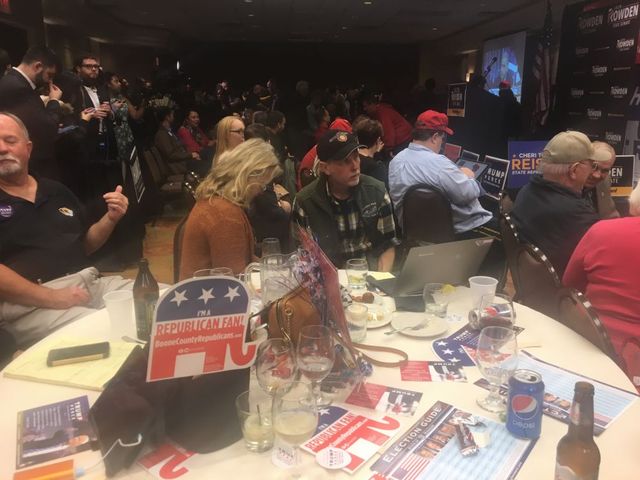 COLUMBIA — At the Holiday Inn Executive Center off I-70, Boone County Republicans celebrated their winning candidates in the 2016 elections on Tuesday.

In Missouri, Republican candidates on the ballot had a complete sweep of the state-wide offices.

The Boone County Republican Central Committee watch party kicked off at around 7 p.m., with hundreds of supporters in the room by 9 p.m.

The crowd was in high spirits for most of the night. Early in the evening, KOMU 8 News spoke to multiple people in attendance who were optimistic.

The energized crowd cheered and applauded every time a new state was called for Donald Trump on the television projector screens in the room. On multiple occasions, members of the crowd started chanting Trump's name.

In addition to keeping an eye on the presidential results, GOP party leaders took to the stage periodically to announce to the crowd local election results as they came in.

Caleb Rowden, Chuck Basye, Cheri Reisch and Fred Parry were among the local candidates in attendance who gave speeches to the crowd after receiving concession calls from their opponents.

In Rowden's emotional speech after winning the 19th District State Senate seat, he thanked his family for all their support throughout the campaign. He added that this was a very special night for the GOP.

"I'm very very honored to be able to represent and stand alongside you guys," Rowden said. "I really do thank you, and here's to a great four years."

Boone County Republican Central Committee chairman Mike Zweifel teared up as he introduced Chuck Basye to the stage to announce Basye's win as a state representative.

"It's been an very interesting last couple of weeks," Basye said. "I was told a couple of times that I might not be successful, but it looks like we've pulled off a statewide sweep."

The party officially ended around midnight, but around fifty party-goers stayed behind to await the result of the presidential election. Donald Trump gave his acceptance speech at 2 a.m.

[Editor's Note: This story has been updated to correct misspellings of Chuck Basye's last name.]