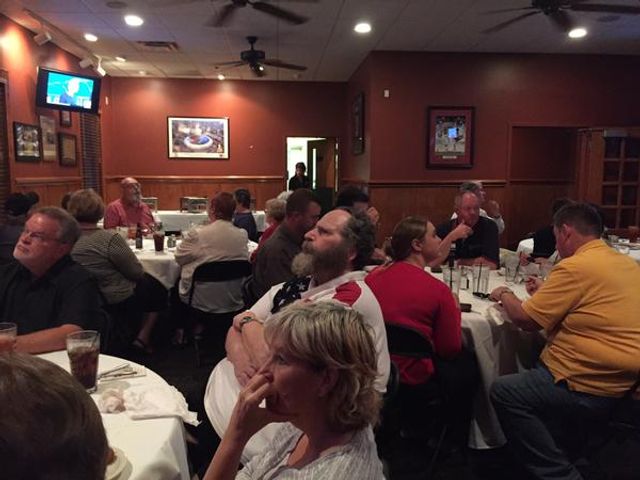 Mark Zweifel, chair of the Boone County Republican Central Committee, said the event was held as a way for Republicans in Boone County to come together.

"We just thought it would be a fun idea to have a debate watch party," Zweifel said. "With everybody together and just have a little fun with it."

Zweifel said he hopes there will be more barbs thrown during the second debate. Zweifel said he's looking forward to seeing how Carson and Fiorina perform tonight.

Homer Page, chair of the Boone County Democratic Committee, said he is watching to see how Donald Trump performs.

"I am hopeful that he will do very well," Page said. "Because running against Donald Trump would be a very happy thing for Democrats to do."

Below: Homer Page said on Sept. 16, 2015, in Columbia, Missouri, that he hopes Donald Trump performs well in the second Republican Presidential Debate. Page, a chairperson on the Boone County Democratic Committee, said running against Trump would be a very happy thing for Democrats. Photo: Mitchel Summers.

Below: A watch party for the second Republican Presidential Debate was held at D'Rowe's Restaurant & Bar on Sept. 16, 2015, in Columbia, Missouri. These stickers were passed out at the event. Photo: Mitchel Summers.

Below: Numerous individuals gather at D'Rowe's Restaurant & Bar on Sept. 16, 2015 in Columbia, Missouri. Viewers listened intently to the speeches given by the candidates. Many viewers clapped, cheered, and shouted "Amen!" in support. Photo: Mitchel Summers.