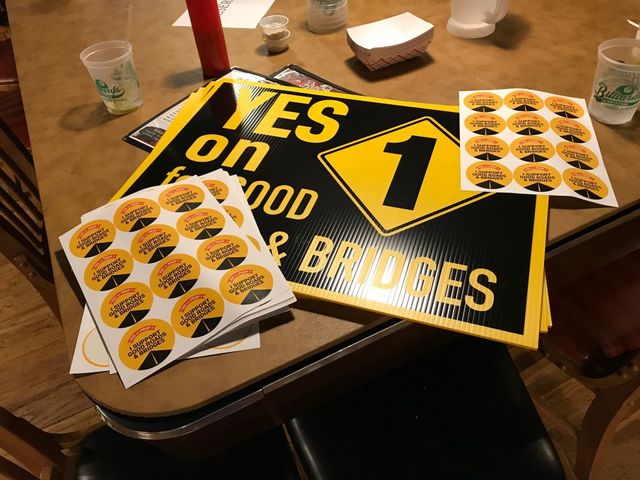 The ballot offered two options: A “yes” vote for a half-cent countywide sales tax that pays for roads, bridges and right-of-ways, and a "no” option that would have raised property taxes from 5 cents to 29 cents per $100 of assessed value.

Proposition 1 funds 80 percent of Boone County’s road and bridge projects, while the county maintains 771 miles of roadway and 270 bridges.

Scott Charton, owner of Charton Communications & Consulting, said 80 percent of the revenues will go toward county projects, and most of what’s left over will be shared with local communities for their street, bridge and road projects. He said the proposition brought in $14 million for roads and bridges in 2016.

Roger Wilson, former Missouri Governor who chairs the Yes For Good Roads Committee, said he's lived in Boone County all his life. He said it’s fair to have out-of-town visitors pay for their wear and tear on the county’s roads.

“The newest example we’ll have is all the tourism created by the eclipse,” he said. “They’re probably gonna be on every road in Boone County during the eclipse. It’s probably the fairest tax of all when it comes to supporting the road system to let everybody that uses it pay for part of it.”

“Because you don’t have Republican roads or Democratic roads,” he said. “You just have roads.”

Wilson said, “The roads are for the public safety of all of our children, all of our seniors, all of our citizenry. That is paramount. Any great civilization that you see on the face of the earth has always had a great transportation system.”

Tuesday’s renewal will be in effect until 2028.