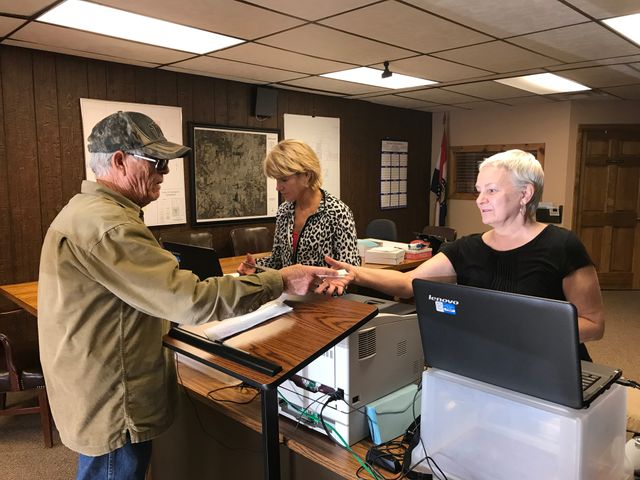 ASHLAND – Those who live around Ashland were able to avoid paying an online convenience fee or driving to Columbia to pay their property taxes for the first time. The Boone County Collector's Office took property taxes at the Ashland City Hall from December 11 through the 12.

Anyone could drop off his or her taxes to deputy collectors who then delivered them to the the Boone County Collector's Office. The deputies collected personal property taxes, real estate taxes and more.

Lyn Woolford is the Ashland Police Chief and City Administrator. He said this year was a sort of test run.

"It's kind of a pilot at this point. We were approached by the county collector wanting to know if we'd be interested in allowing his personnel to come to our city hall and use our space so that local people could pay their taxes here," Woolford said.

He said he thinks local residents would prefer the deputy collectors be in town for longer than two days.

Barbara Youngblood was one of the deputies collecting taxes.

“The people that did come were very thankful that we had come down here.” Youngblood said.

Several people said they were glad they did not have to pay to park or fight the traffic in downtown Columbia.

Youngblood said people were pleasantly surprised to see more than just a drop box in front of the building. Several people who came in to pay their taxes also said they were glad they could leave with their receipt in their hands.

Jeff Knierim is an Ashland resident who took advantage of the station set up in the city hall. He said he usually mails his property taxes, but he has driven to Columbia as well. He said the system worked very well.

"I just think it's a good idea, and it'd be great if they could continue doing it," Knierim said.

He said he hopes to see something similar done in Hallsville next year since residents there would also have to mail or commute to pay their taxes.

Employees from the Boone County Collector's Office will be at the Centralia City Hall collecting taxes on December 14 and 15.