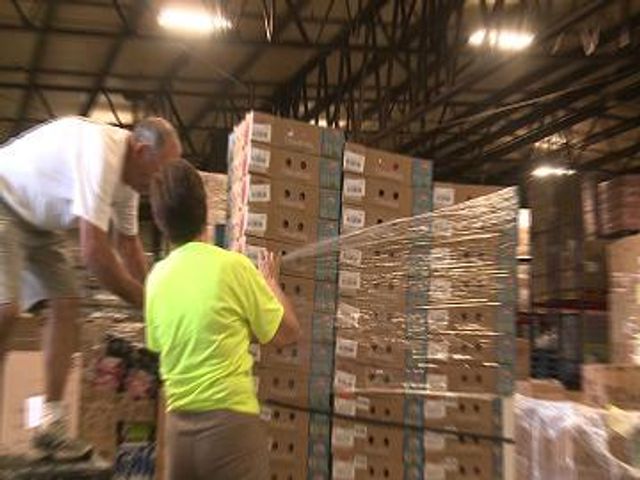 COLUMBIA - Boone County has the lowest unemployment rate of all other counties in central Missouri through the first three months of 2012, according to the Missouri Department of Economic Development. The latest figures show the county has a 4.5 percent unemployment rate. But Peggy Kirkpatrick, executive director of the Food Bank for Central and Northeast Missouri, said in 2010 the Central Pantry distributed 4.5 million pounds of food to 20,956 people.

The unemployment rate and median income, at face value, seem to suggest Boone County is doing well economically. Combine those numbers with the fact that Missouri is in the top-12 for lowest cost of living so far this year, and it seems everything is clicking along.

"I presented those figures to [Columbia] City Council a couple of weeks ago," Kirkpatrick said.

"One of the things that I am trying to make people aware of is even though Boone County has the lowest, or near-lowest, unemployment rates in the state and we have had it for almost the entire recession period, that doesn't mean things are all good and people don't need assistance."

The drop in median household income is also happening to the state and nation, but both at a much slower rate of 6.62 and 6.2 percent, respectively.

Kirkpatrick believes the local drop in median income and rise in people requiring food assistance is not due to unemployment.

"What we are seeing is an extraordinary explosion of people who are underemployed, not necessarily unemployed, but underemployed," she said. "Maybe they were laid off from a manufacturing job and are just trying to find anything, or they end up working a job which they're well over-qualified for. They're settling for less because they need a source of income."

Michael Brooks, president of Regional Economic Development Inc., agreed with Kirkpatrick. "You cannot just simply look at the unemployment rate and understand the dynamics of what the employment situation is," Brooks said.

"Over the last six to eight years, there has been a decline in manufacturing employment here of 15 to one or 200,000 jobs, and those jobs are typically good-paying and provide benefits to the employees," he said.

"Those manufacturing jobs paid with benefits. You had sick leave, you had vacation time, you had health insurance. A lot of these jobs now, where people are working part-time, are with no benefits," Kirkpatrick said.

"During that same time period, we've seen a substantial increase in the number of jobs in both retail, and a category called accommodations and food service. Those two categories tend to pay a lower wage, which makes it more difficult to support a family," Brooks said.

The difficulty of supporting a family appears in Columbia's Public Schools. Of all children in the city's school system, 43 percent of them financially qualify for the free or reduced-price lunch program.

The food bank's buddy pack program is intended as a supplement to the free and reduced-price lunch program for those families in need. Last school year, the program served 8,600 children. That number was an increase from 6,500 in 2010-11.

"We saw that increase in children, and at that time we also saw an increase in food prices. That increase was large enough to raise the cost of a year's worth of one buddy pack from $100 to $180," Kirkpatrick said.

"What we're also seeing is the number of people coming to the pantry who used to be donors, but are no longer donors because they've gone through all of their resources and now need food assistance."

The increasing numbers of people who need food assistance leads back to bringing jobs into the area. Brooks believes this is why the city should proceed forward with the creation of an Enhanced Enterprise Zone to attract those manufacturing jobs.

"IBM is sticking to their pace of hiring 800 people before the end of the year. Imagine if that type of growth was from multiple other big businesses," Brooks said.

Kirkpatrick is quick to point out "Yes, 3M is expanding and hiring people. But at the same time, Schneider Electric is laying off 70 people. So you gain ground in one area, only to lose it in another," she said.

The layoffs, and both under and unemployment put more stress on basic need organizations like the food bank.

"We're more of a band-aid. But we're even looking at shifting and trying more to help people get out of poverty," Kirkpatrick said. "At some point, you can't get a big enough band-aid, and we're very close to that."